Madame, your chariot awaits! Another item off the winter bucket list checked off!

Dog sledding has been on the winter bucket list for a few years now so over the Christmas holidays while driving up to Deerhurst I googled dog sledding near Ottawa and boom… we found Escape Eskimo. Thank you all knowing Google machine! 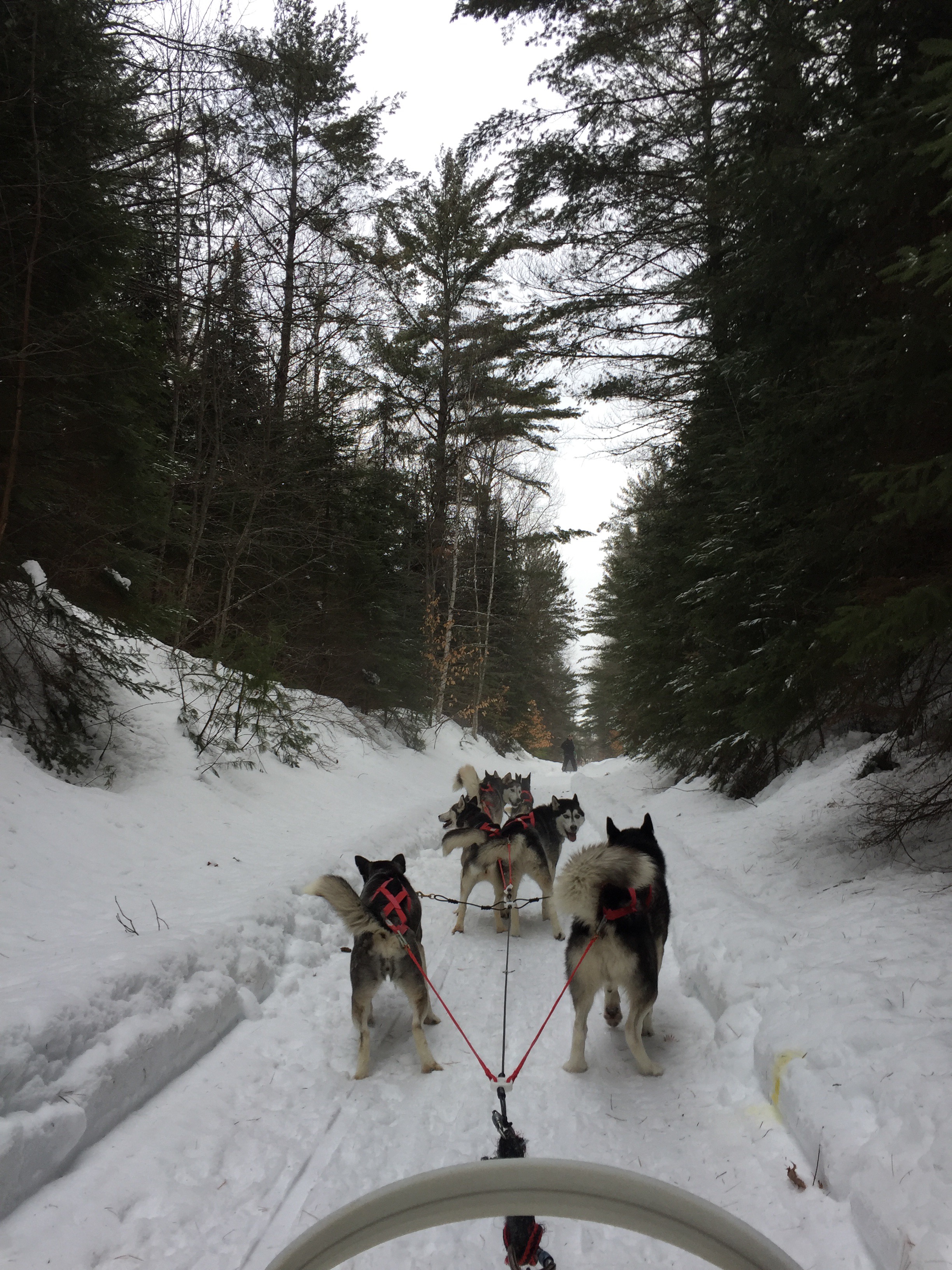 We booked in for a half day adventure on Saturday this past weekend and got ready for the day trip. The morning adventure starts at 8am so we left Ottawa around 6am to grab coffee & hot oatmeal from a drive through  and hit the road.

We arrived in Otter Lake, QC just as the sun was rising. We were greeted by Caroline at the door as Sylvain was loading the Huskies into the transport trailer. We signed waivers, filled out health forms and got a briefing of the trail, controlling the sleds and how we’d get the sleds hitched up with the dogs! The instructions were all in french with a bit of English as the other couple were francophone and Mike and I are bilingual. I loved being able to practice my French but Sylvain gave instructions in English if I asked for a clarification. He is completely bilingual so if you’re thinking of going up you’ll get briefed in your language of choice! The next best touch was Caroline even lent me her massive winter boots as my hiking boots probably weren’t going to cut it in the -30 C weather.

We piled into Sylvain’s SUV and headed 3 mins down the road to a private trail. We set up the three sleds as it was just Mike and I, another couple and our guide. Mike and the other male helped Sylvain put the harnesses on the dogs and bring them over to the sleds while myself and the other female held onto the line for dear life as the dogs were hooked up. They had so much energy and were ready to run! 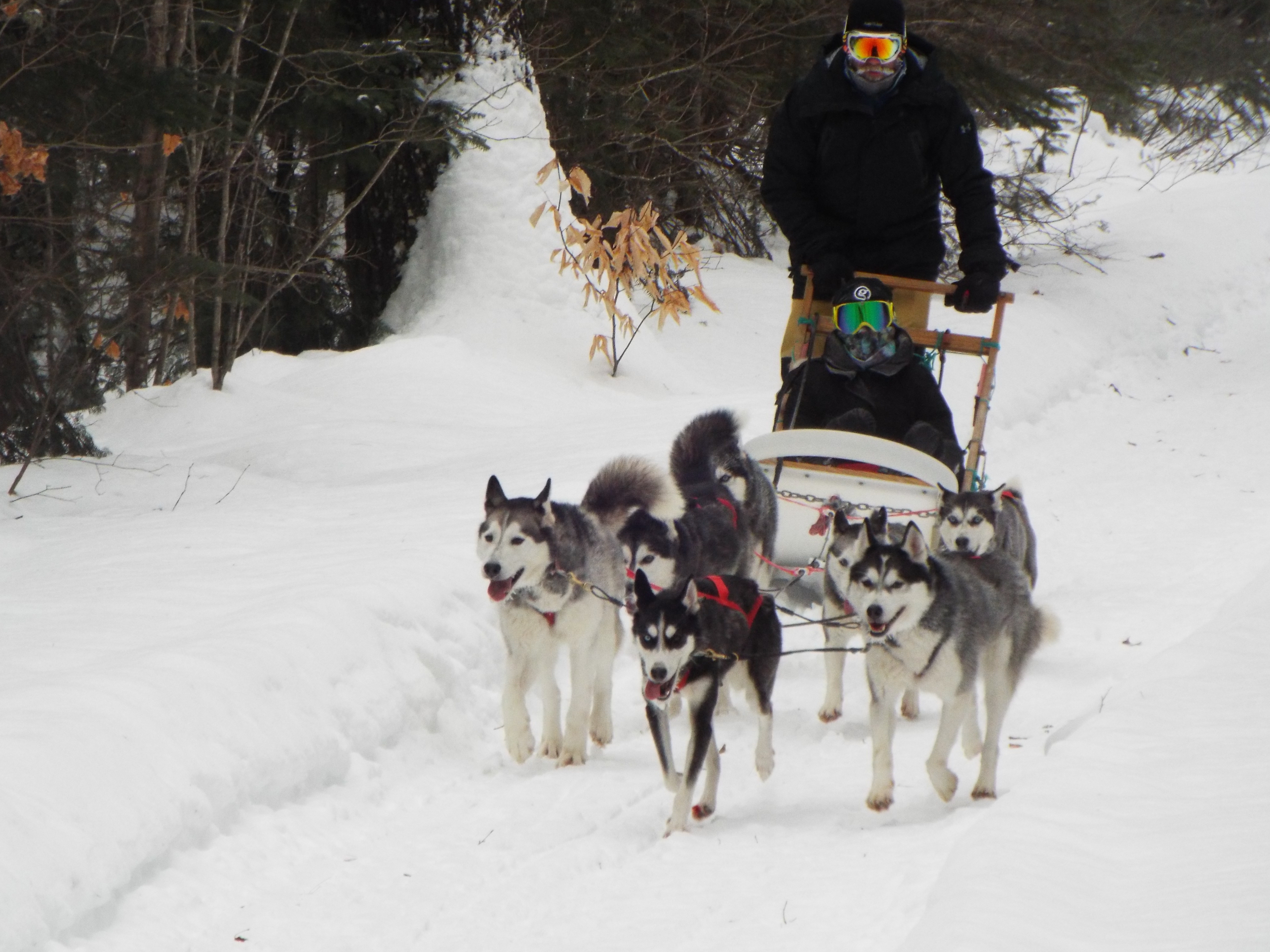 The first two sleds took off, Mike unhooked our sled from the truck and with a command of OK! we were off. Our dogs were so ready to run. We had one guy (hooked up right in front of the sled) which we nicknamed Turbo because he was just raring to go. Every time we stopped he would bark incessantly and jump in his harness. I swear he was saying “WHY ARE WE STOPPING!? I WANT TO RUN!!!!” 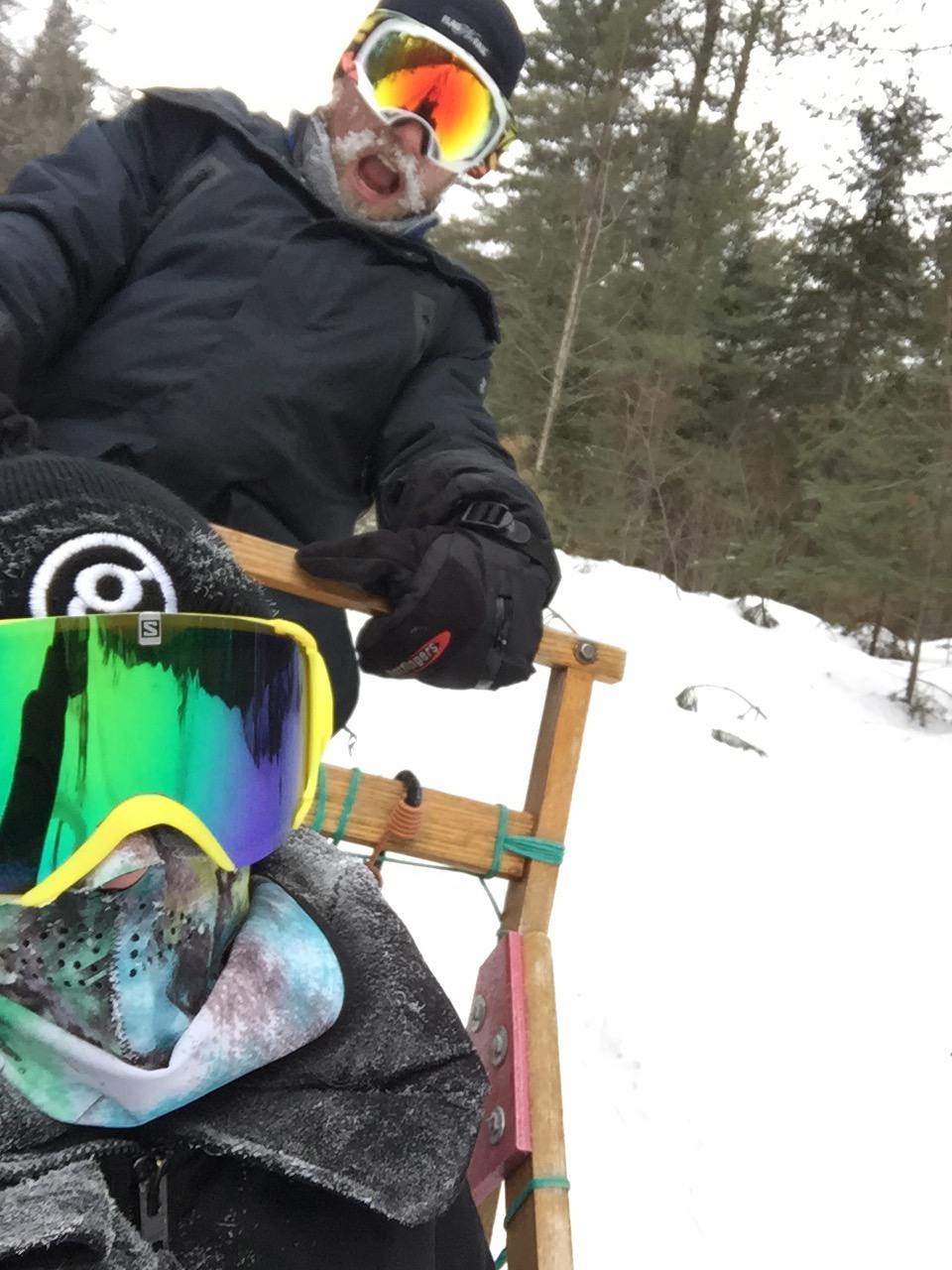 Mike and I layered up. I actually couldn’t move very well! On my bottom half I had long underwear, sweatpants and snow pants plus -40 C socks, with toe warming pads on the bottom plus winter boots. On my upper half I had UnderArmour cold gear turtleneck, base layer, long underwear top, 2 fleece pull overs and my Nobis winter jacket plus a buff, plus my run/snowboard face mask plus ski goggles plus a headband plus a hat!

We had the opportunity to drive the sled one way and then switch at the turn around point. I could tell Mike was so happy driving and I was quite content on the sled all bundled up in a blanket that I let him drive the whole trip. You should’ve seen his smile. That meant more to me than hopping on the back and hoping to keep the sled on the trail 🙂 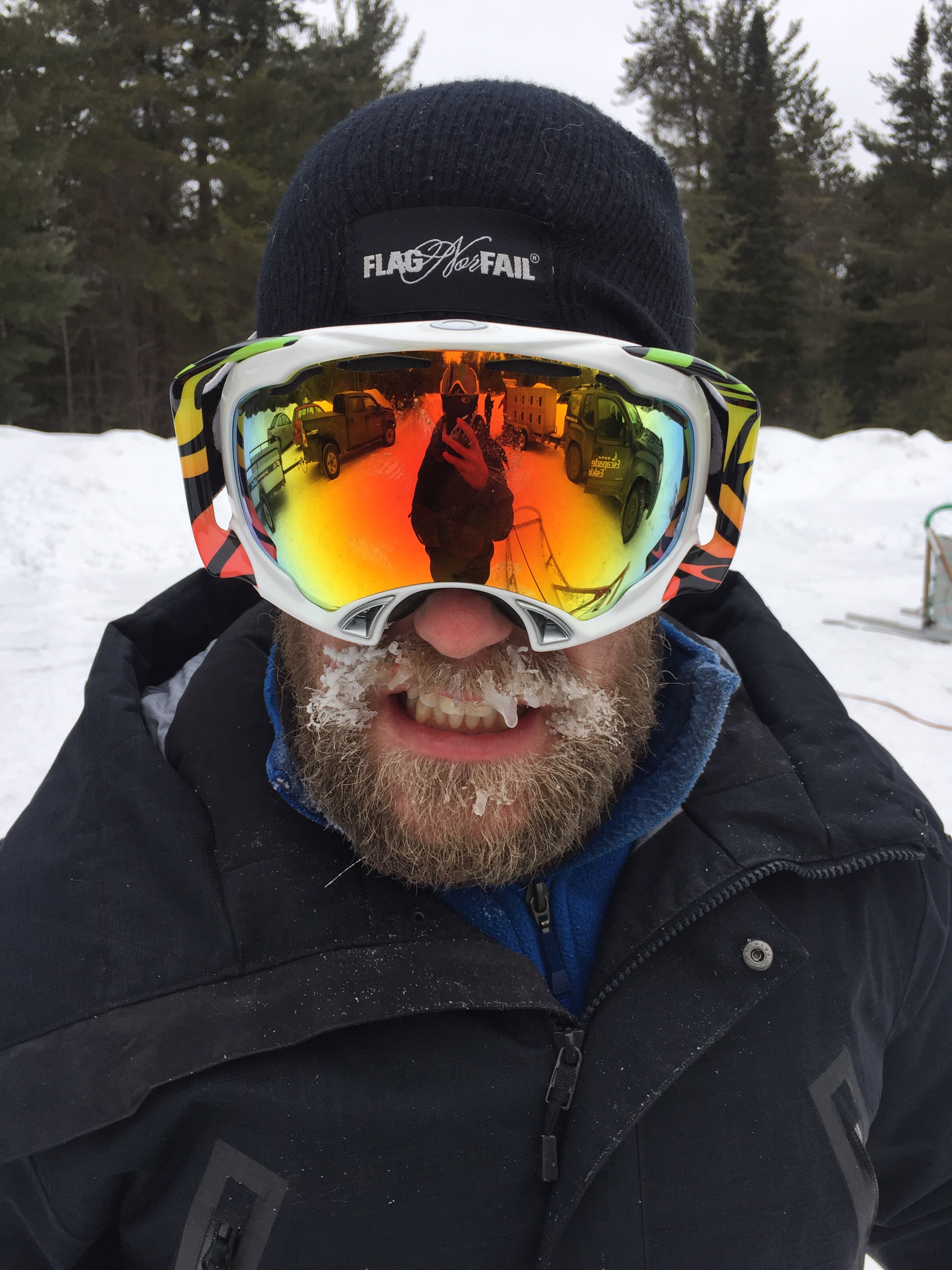 The best part of the trip that I know not everyone gets a chance to experience is seeing the husky puppies. I knew the owner could tell that both couples were dog people. Because what’s really important is ensuring that puppies are receiving the proper corrections. We were told that if they started nipping (like you can see below) that you’d just hold their mouth shut like their mother would do. We fell in love with this little guy and Mike had to do a few corrections before he could love on the pup with petting and belly rubs! 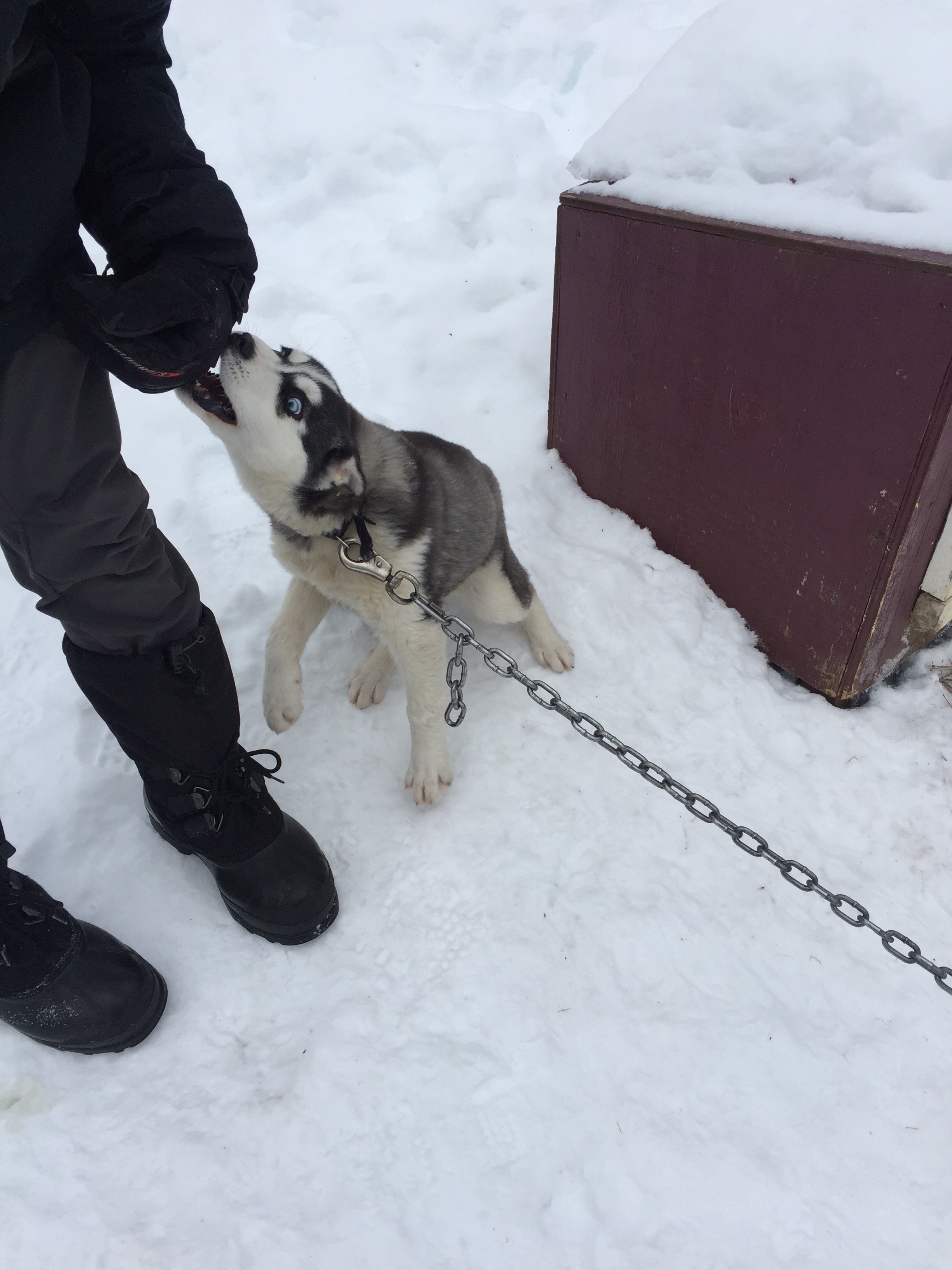 The other perfect touch to the day was getting hot chocolate, coffee or tea after we got back from the ride. It was the perfect warm up from the cold day. My heart is happy and getting to finally experience this. I also started looking up a ton of history on huskies and dog sledding in Canada and just the history of how important it has been in this country. Gave me a new found respect for the fun excursion that can just simply live on a bucket list!

How are you getting out and enjoying this winter!?

This site uses Akismet to reduce spam. Learn how your comment data is processed.

Get the Autoimmune Healing Guide to start optimizing different areas of your life.

Get my Top 10 Ways to Use Essential Oils Cheat Sheet!

Success! Now check your email to get the cheat sheet!

5 Areas of Life to Help Heal

Thriving is greater than surviing. Here’s a roadmap for you after an MS diagnosis.

Their relationship is something else

Take a moment to breathe

5 attitudes to develop to have an autoimmune thriv

When times are tough, these are my people. I hav

Get your oils out of the pretty storage box and in