I’m surprised we ever came back to Ontario after an epic, epic (because one epic couldn’t do this place justice) week in Alberta exploring in and around Banff. 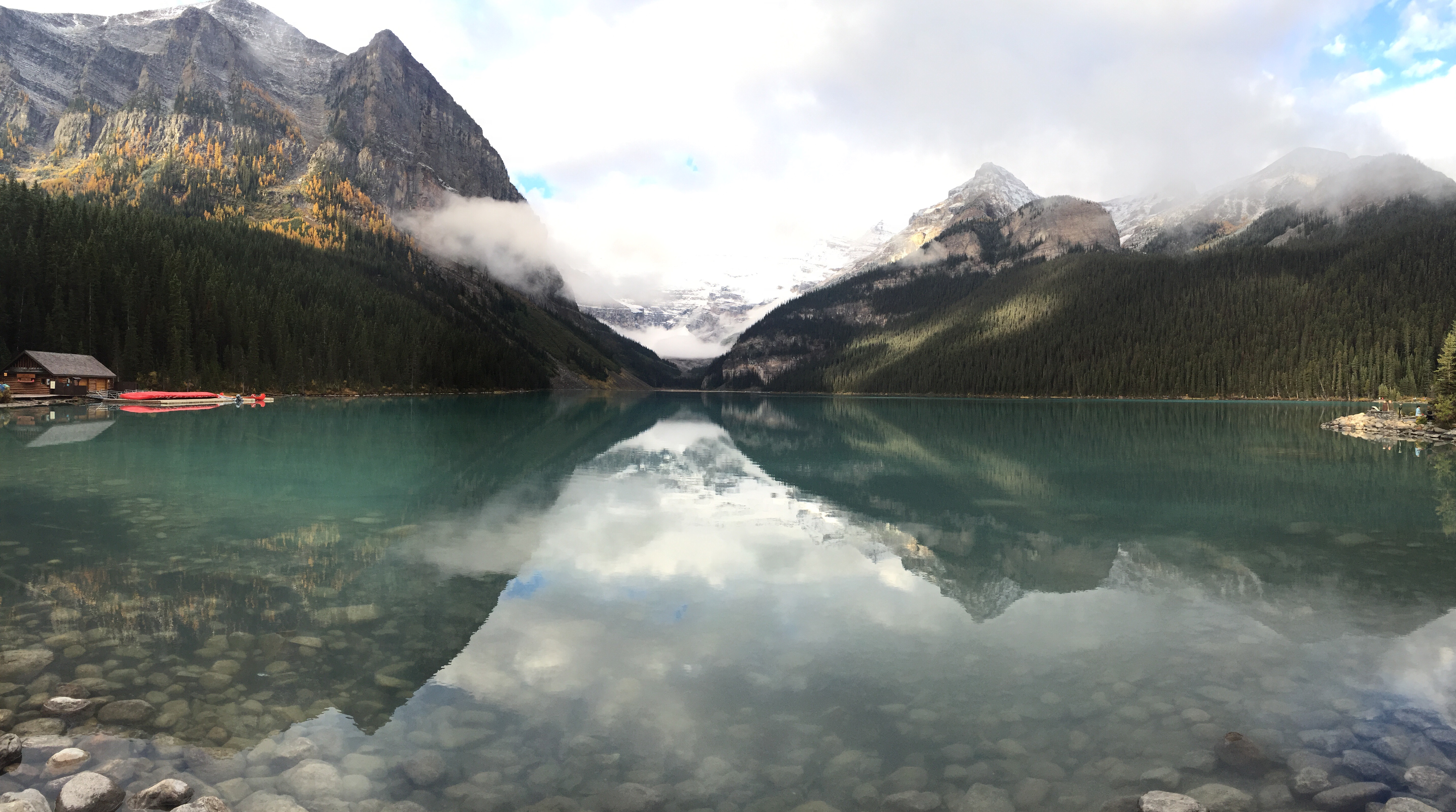 From the infamous Lake Louise, pictured above, to the summiting a mountain for the first time. I was filled with wonder, awe and got amazing exercise in daily.

After Mike and I left Camp Yoga near Canmore Alberta we headed west for the Rockies. We stopped in Canmore for some healthy lunch supplies for the week and then arrived in Banff after purchasing a week National Park pass at the gates.  We found our accommodations at Banff Aspen Lodge and got settled before walking around the town. Our hotel was less than spectacular and highly overpriced for the size of the room we were given so nothing really to write home about but served as a great home base for adventures for the week. 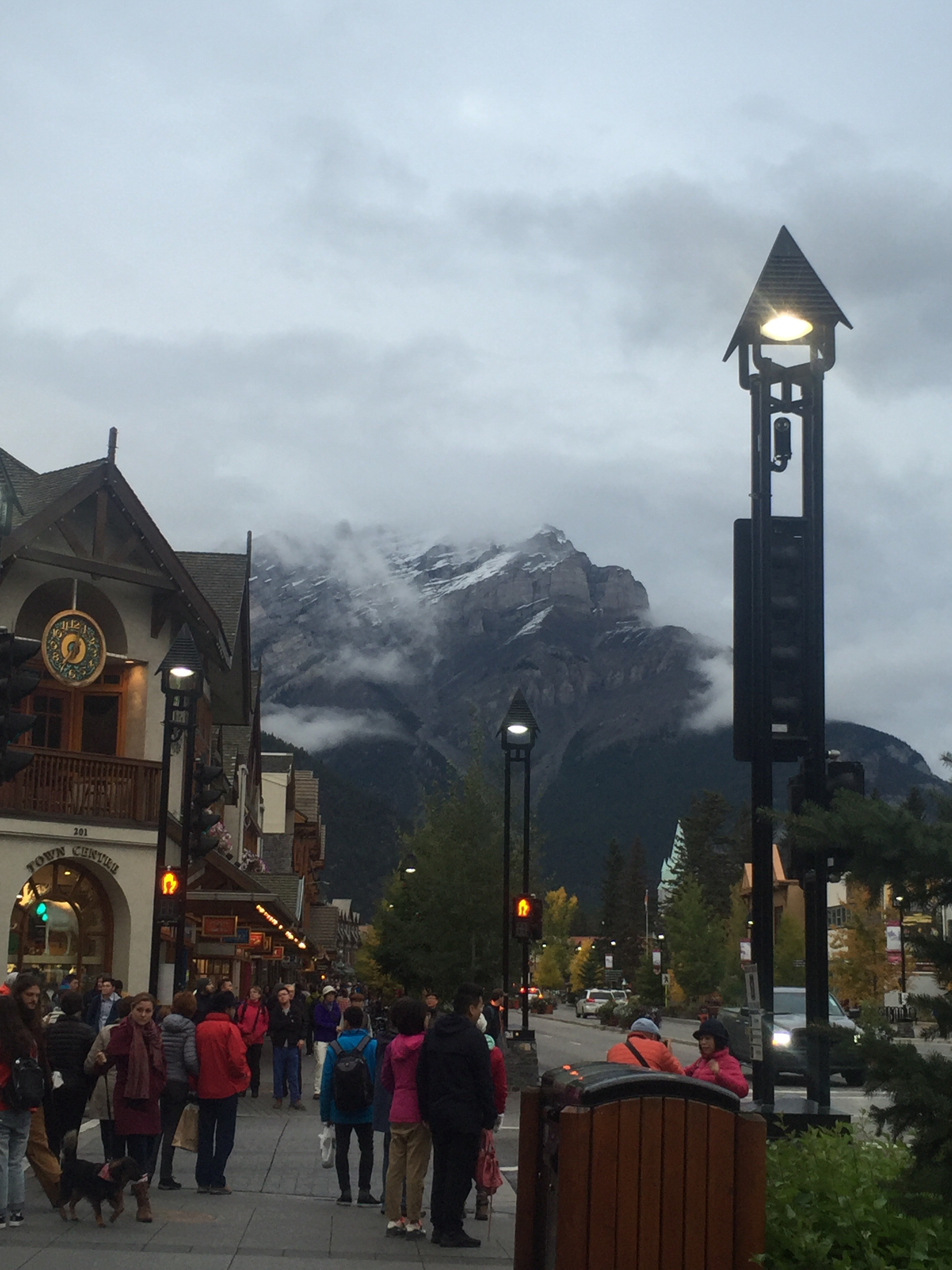 Monday morning we decided to tackle Saddleback Pass & Fairview Mountain. It was one of my favourite hikes of the week. We started out early in the morning from the Lake Louise parking lot. We were able to snap an epic picture of the lake before it was surround by fog most other days that week and escape the piles of tourists flying out of tour buses up the path. For the first part of the hike there was several low clouds covering the mountain ranges opposite our hike. It made for some epic photos and I was fascinated to see the Larch trees for the first time. Apparently the only needle tree to actually change colour in the fall and we luckily were there during the change. 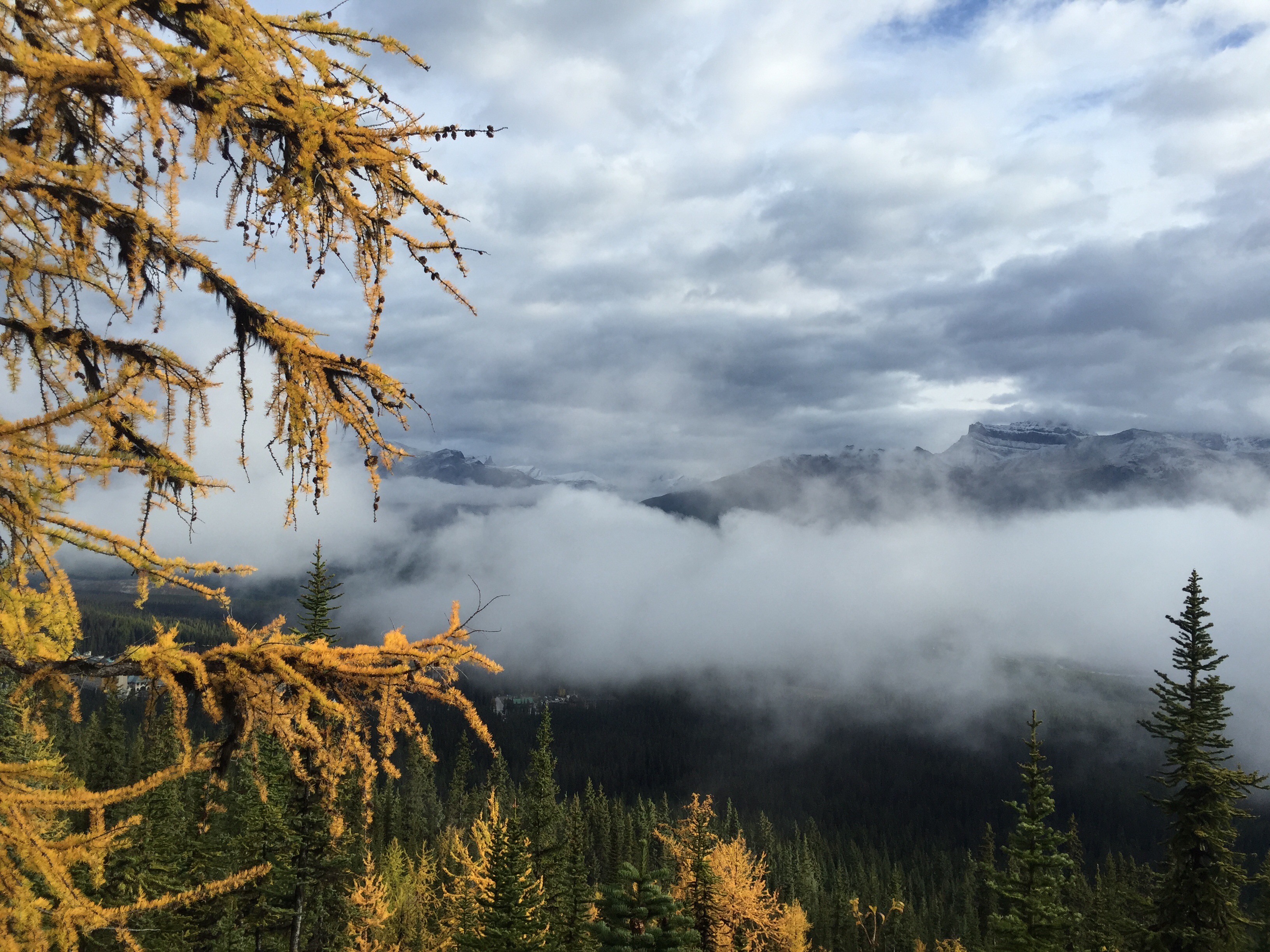 The first part of the hike was through meandering switchbacks. I was terrified of bears pretty much every day so would talk my head off, do Tarzan yells, yodel, sing or just madly clap every 5 seconds. I know Mike really enjoyed being serenaded when we got to the top of the pass. I was knocked back in awe and stopped talking and he said “I love how quiet it is up here!” 🙂 Whoops! 🙂 Oh well I for sure kept all the wildlife away so I’m ok with that.

As we continued on the Fairview Mountain trail I was a bit scared as we got a little higher up. It was my first time on a trail like this and I definitely let my imagination wander. On the way down I wondered how I could ever have been a little scared but have a new appreciation for how different things impact people. I had thankfully bought hiking poles from MEC the week before our trip and got amazing use out of them. They made me more confident, helped balance me on downhills and we fun to swat at Mike with. 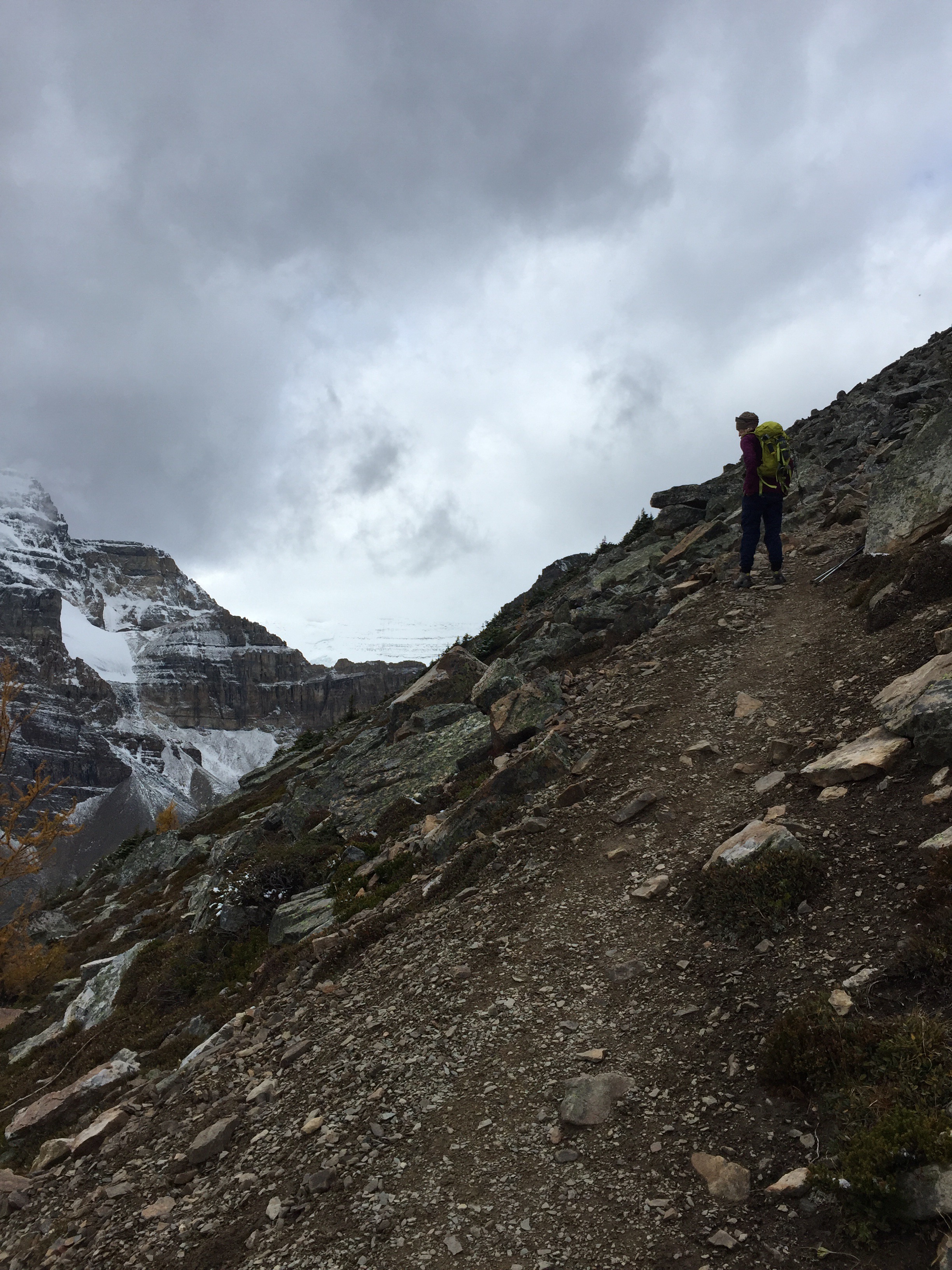 That view at the top though was so worth it. I’m just going to leave this here… 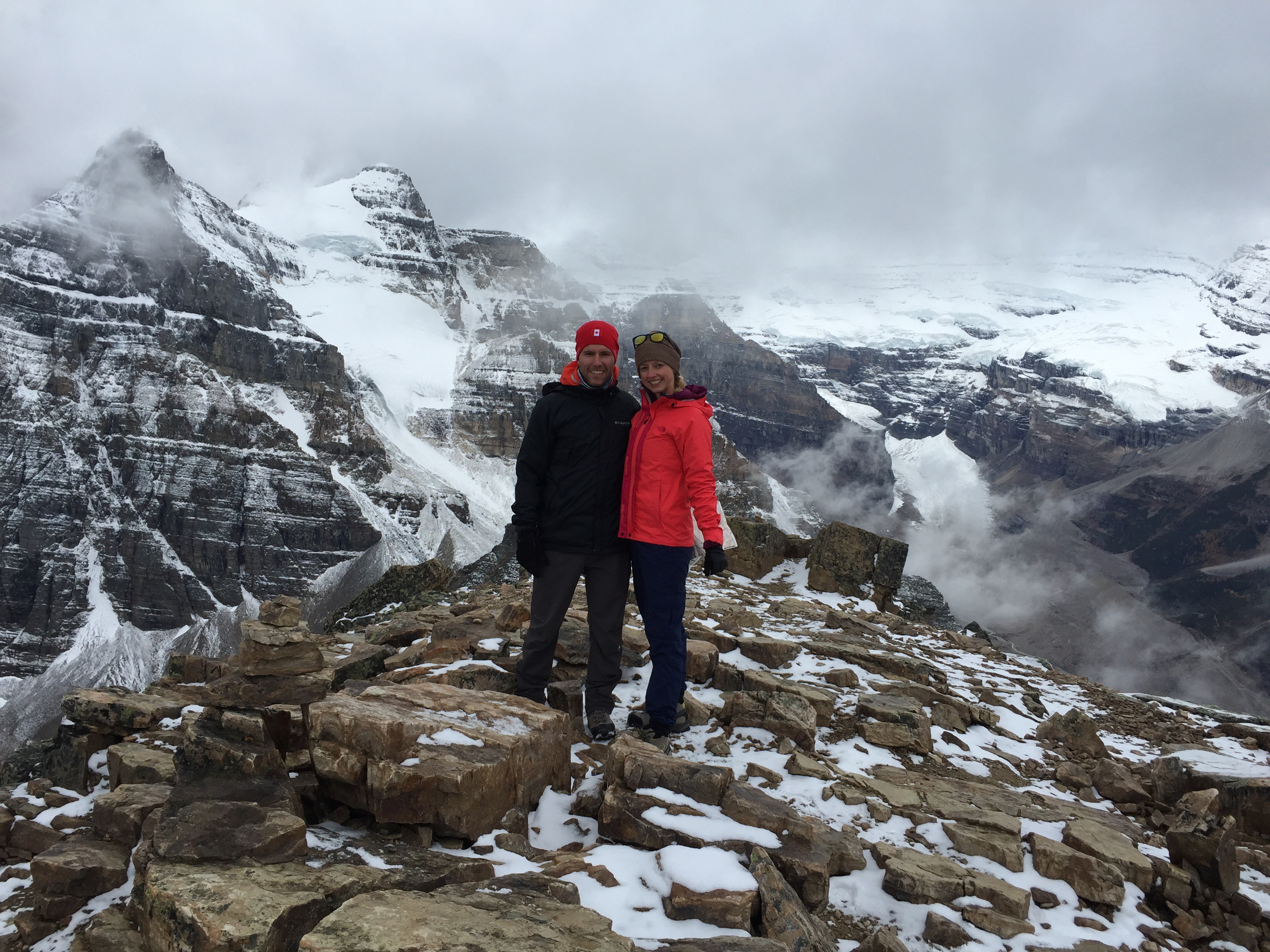 We climbed, ran back down and headed off to dinner with my childhood friend’s Megan and Rachel. Megan has made Banff her home and Rachel just got back from a backcountry trip so it was amazing to see them both.

Mike and I definitely didn’t pack light for this trip. Packing for a hiking trip that could have winter conditions definitely means my suitcase & carry on were packed to every nook and cranny. I’m really happy with everything that I brought and my ability to layer properly on my first mountain trip.  Here is a list of everything I’m wearing for our hikes.

Hiking Boots: We invested in Scarpa Kailash GTX Day Hiking Boots. I have the women’s version and Mike got the mens. Yes we had matching boots. Cue… AWWWW….

Compression Tights, Tank & Tshirt: I wore my 2XU tights and tshirt top pretty much every day as my base layer and they worked wonders. I had brought my thermal tights and long sleeve as well and they were packed in our dry bag in case anything happened on our hikes.

Outer Layer Pants: These are also from MEC but were purchased wayyyy back when. I swear I had them on camping trips as a kid. They luckily still fit!

Day Pack: I brought my Alpine which served me really well hiking in Lake Placid and it was awesome for this trip too! I could fit all my layers as I de-robed throughout our hikes, our lunch for the day, snacks, headlamp, waterproof matches, swiss army knife, gloves and a first aid kit.

MEC Obsession Hoodie: This was a perfect layer over a long sleeve that was warm enough as an outer shell but light enough that I could also fit it under my raincoat as an extra layer when it got cold.

North Face Raincoat: I’ve had this for a year now. I’ve used it a handful of times but it was great to have it on this trip as we had three days of rain/snow/slush.

Our day 2 hike involved a whole lot of snow. 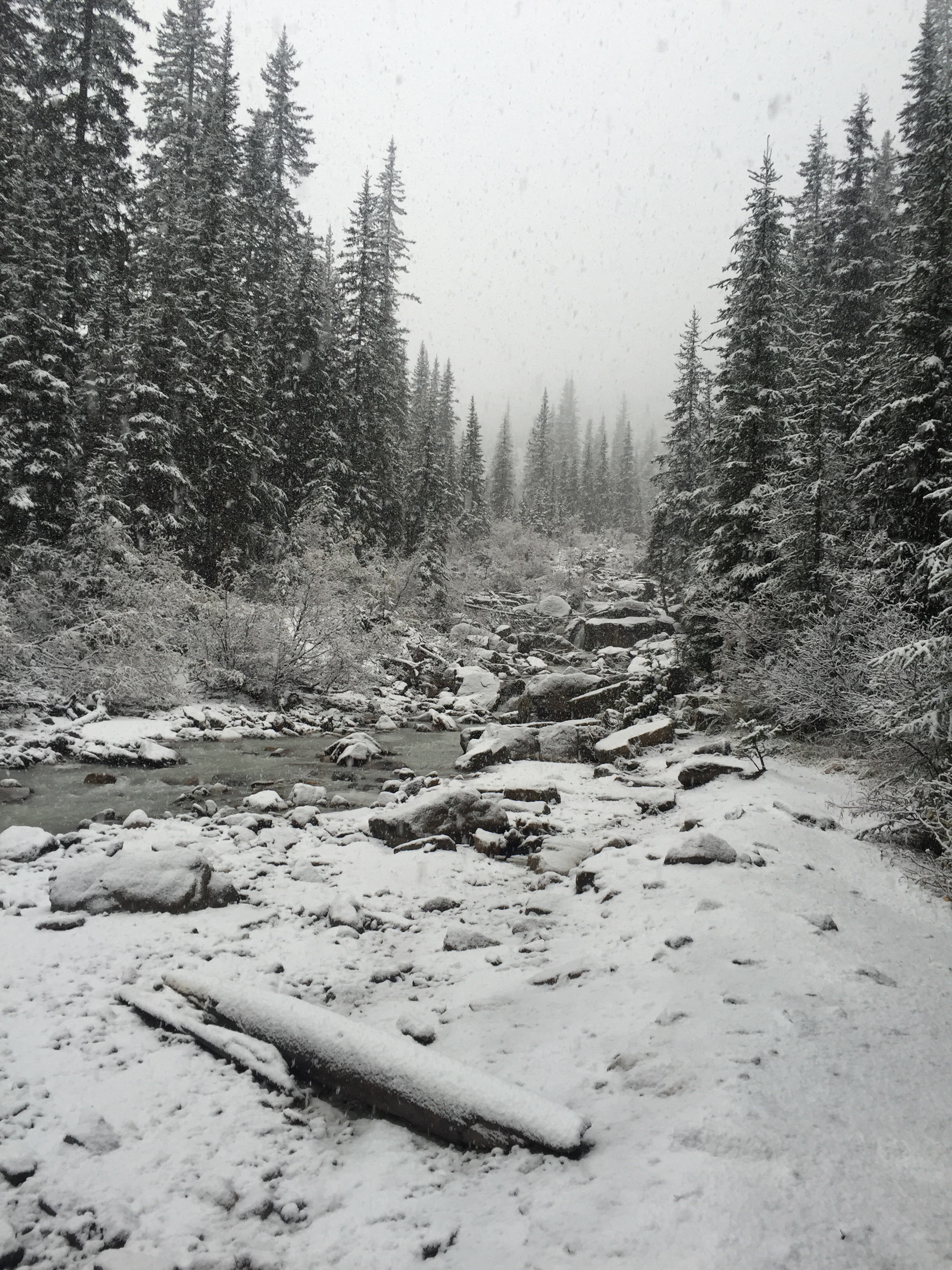 We started out at the Lake Louise parking lot again and this time went to the right along the waterfront trail. My friend Jamie (originally from Banff) told me this is her favourite hike and we knew it was fairly flat so a good hike to tackle the day after doing Fairview Mountain. We were told the views were pretty epic but unfortunately encountered nothing but snow. Still a really pretty photo at the base of the Tea House. If you do this hike I highly recommend bringing some cash for a hot chocolate, tea or coffee at the Tea House at the base of the glaciers! 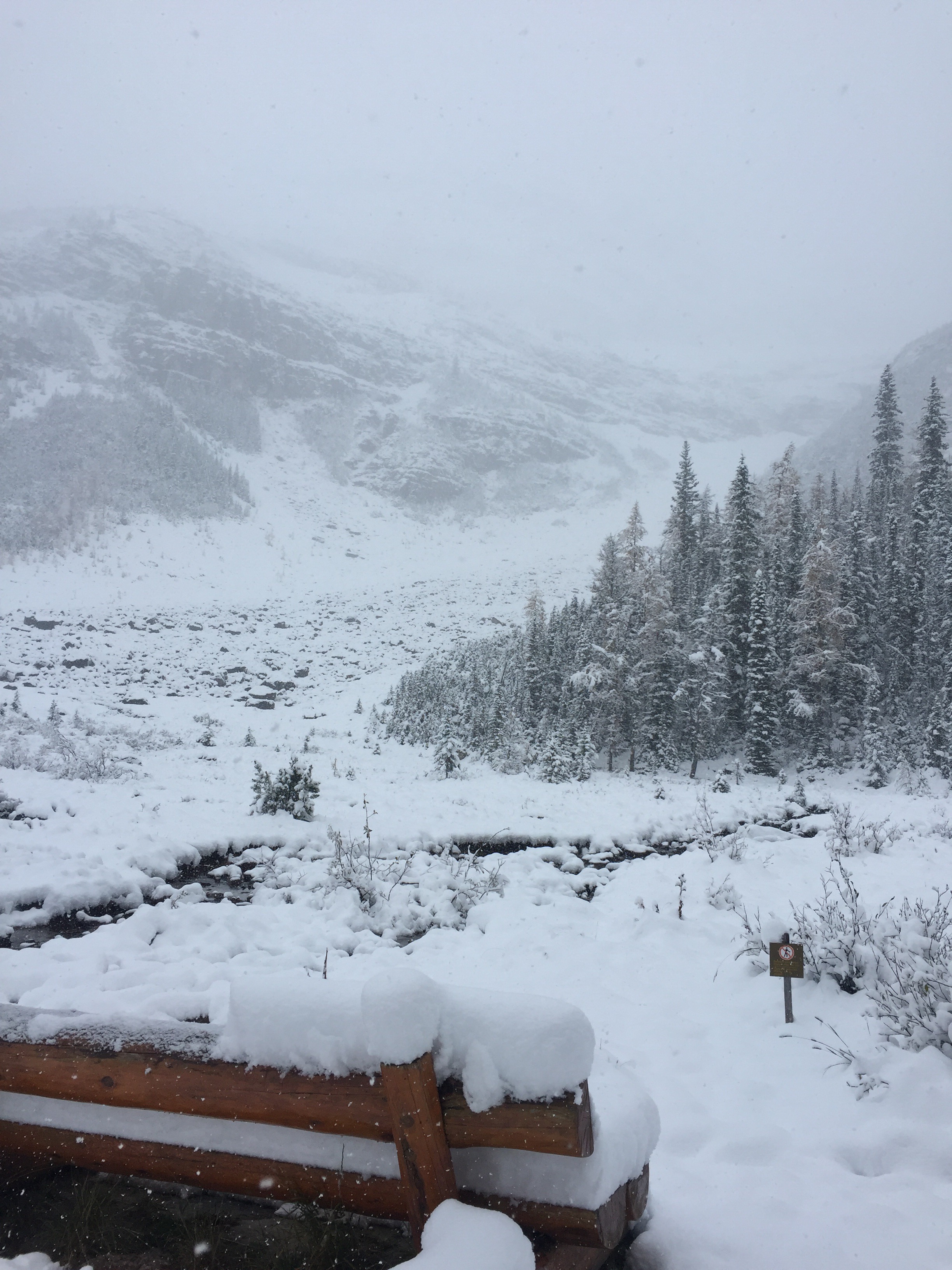 Day 3 was another epic hike for the books. We tackled Larch Valley and Sentinel Pass. You start out at Morraine Lake (still in the Lake Louise area). It was another beautiful lake and another parking lot filled with tourists. We snapped a quick shot and headed to the trail head to get away from the crowds. There have been bear warnings in this area so there was a rule that you had to hike in groups of four. We found another couple from Holland so we headed up the trail chatting and hiking with them. 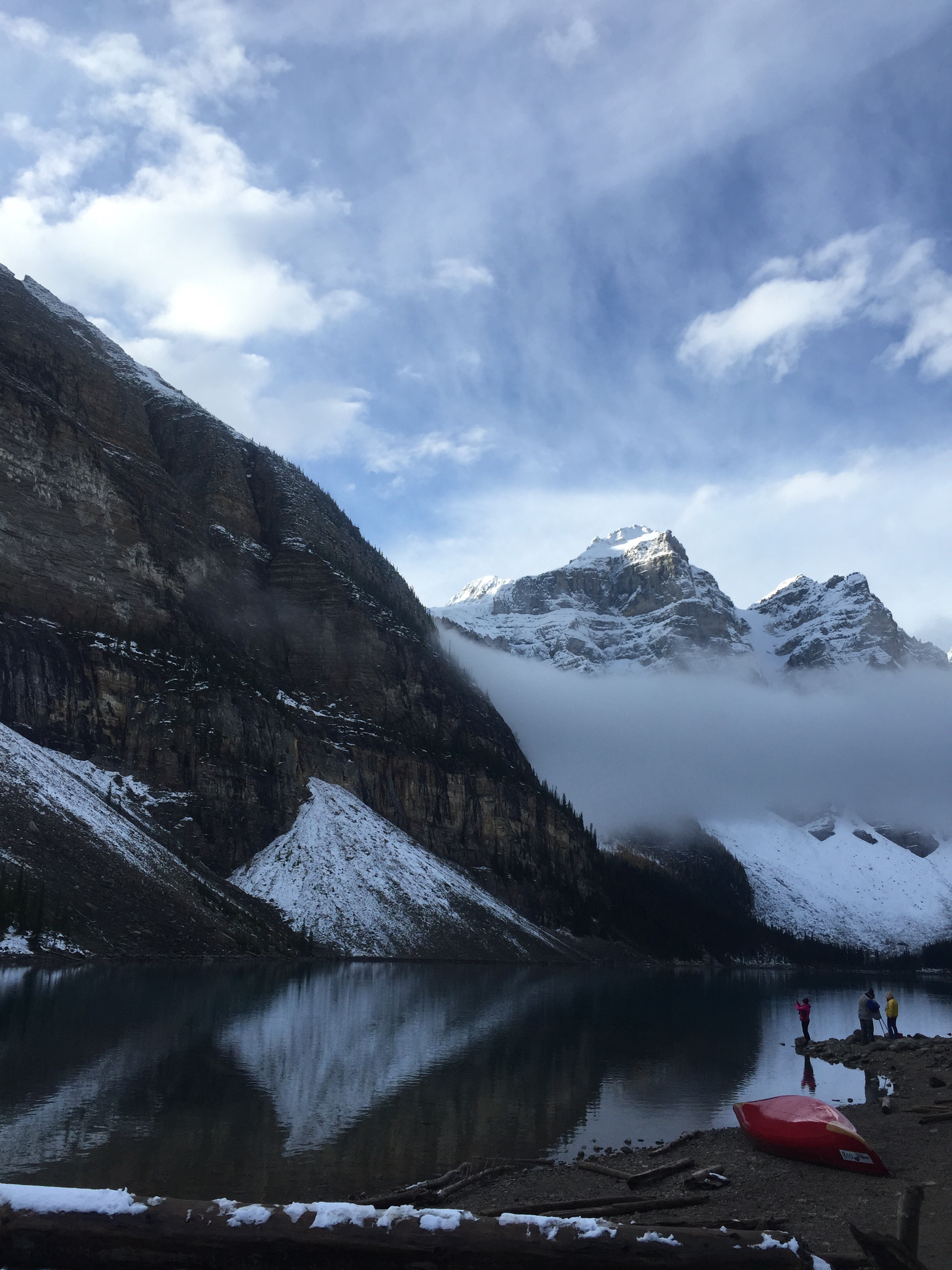 I couldn’t believe my eyes when we got into Larch Valley. It was breathtakingly spectacular. Definitely my favourite view from the week. 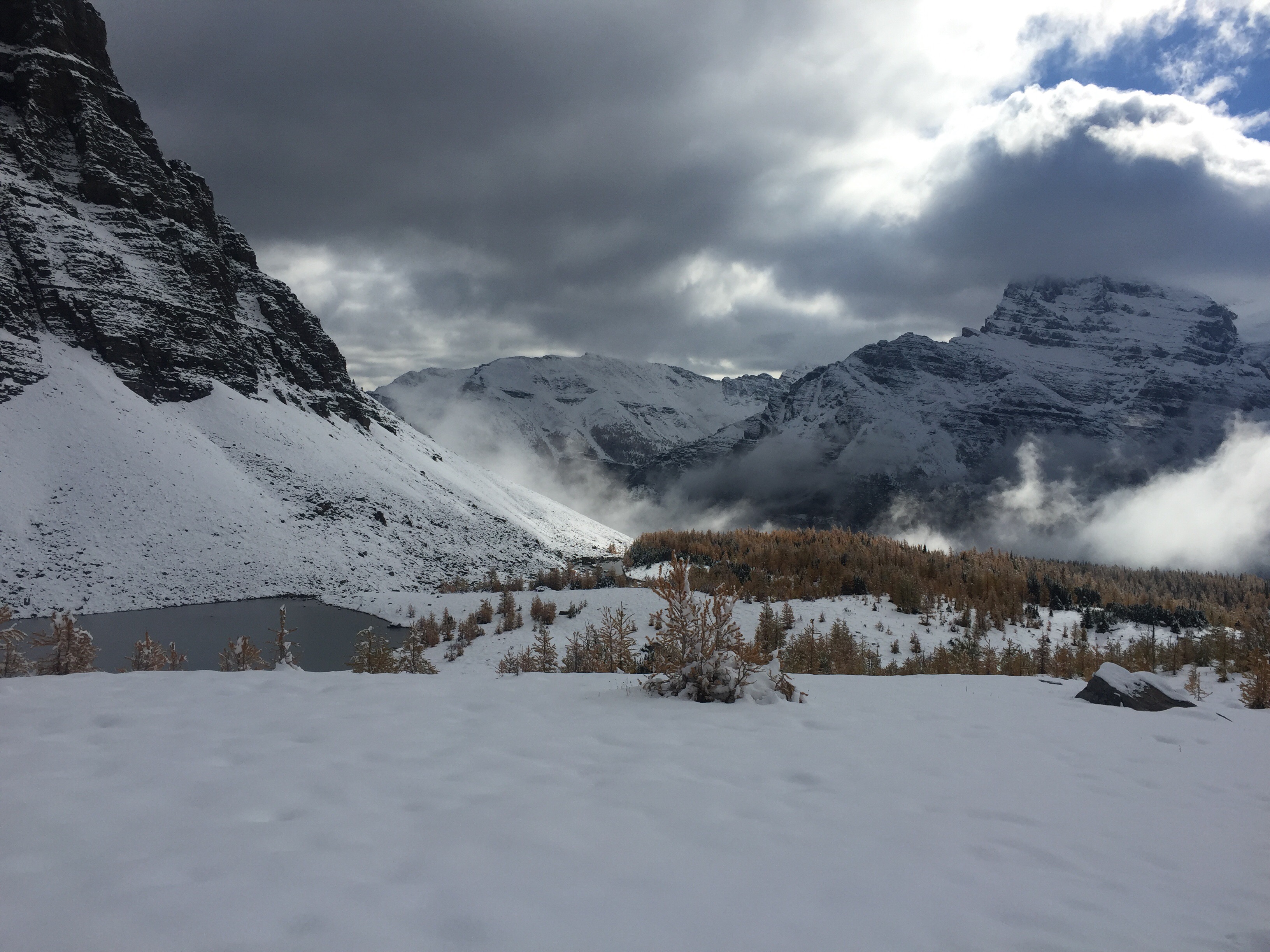 We continued through the valley towards the pass on a trail forged by a few other hikers so we could tackle Sentinel Pass. Unfortunately the hikers really didn’t know where they were going with the layer of snow and were unable to find the trail to the switchbacks up the pass. We chose not to follow them as they had walked to the base of the bowl and started climbing straight up. Mike broke trail off to the right and we luckily found the switchbacks easily from there. The view at the top of the pass was incredible. We even got to see a few avalanches on the far side of the Valley. 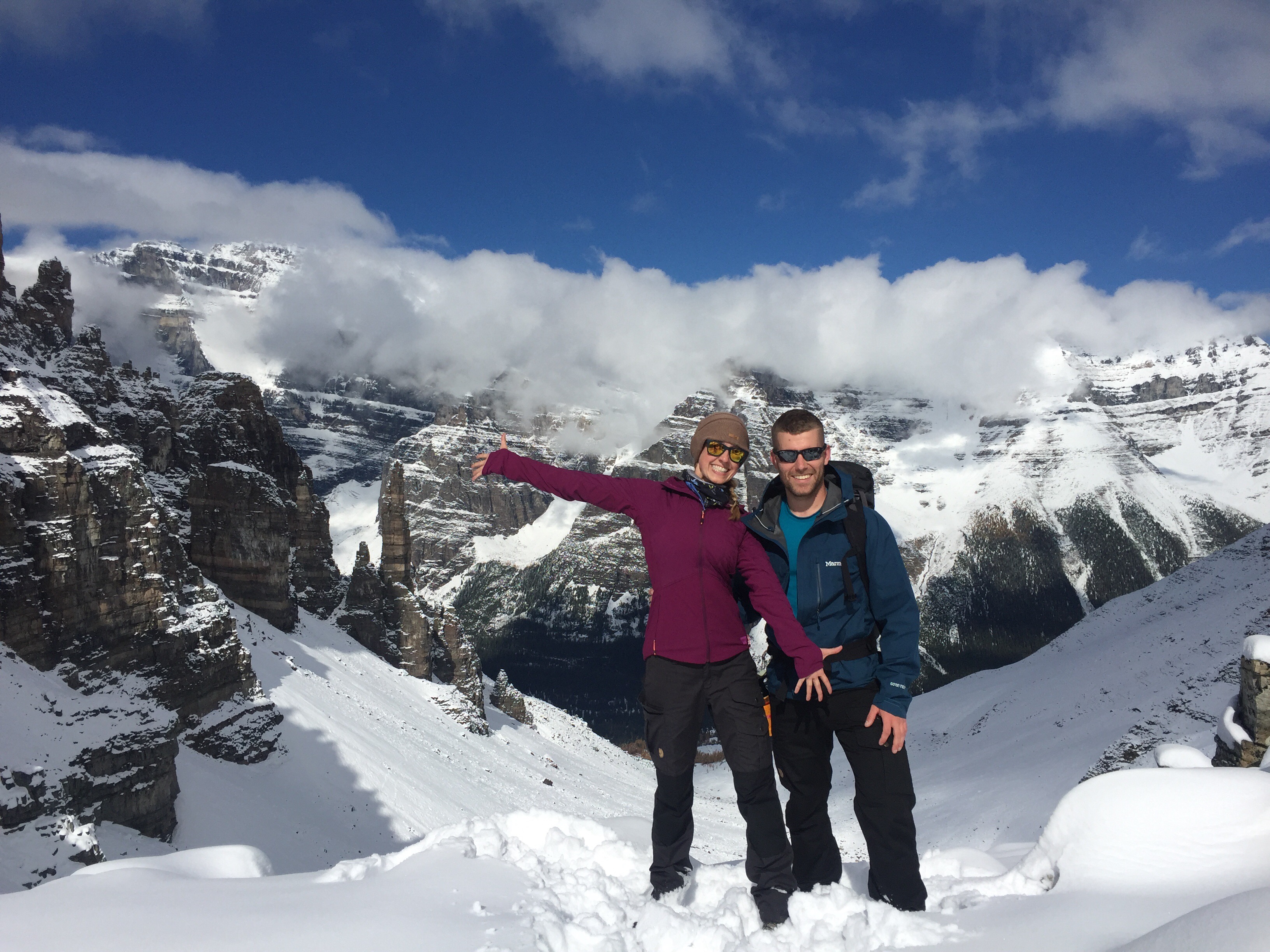 My MEC Obsession Hoodie was perfect for this hike. But let me tell you about these epics pants! The day before Mike and I had found this really cool store called Fjallraven in Banff. The only technical pants I had with me were the outer layer shell from MEC and they had gotten soaked in our hike the day before so we both picked up the KEB Trousers (seen in the picture above). So now our pants & boots match! 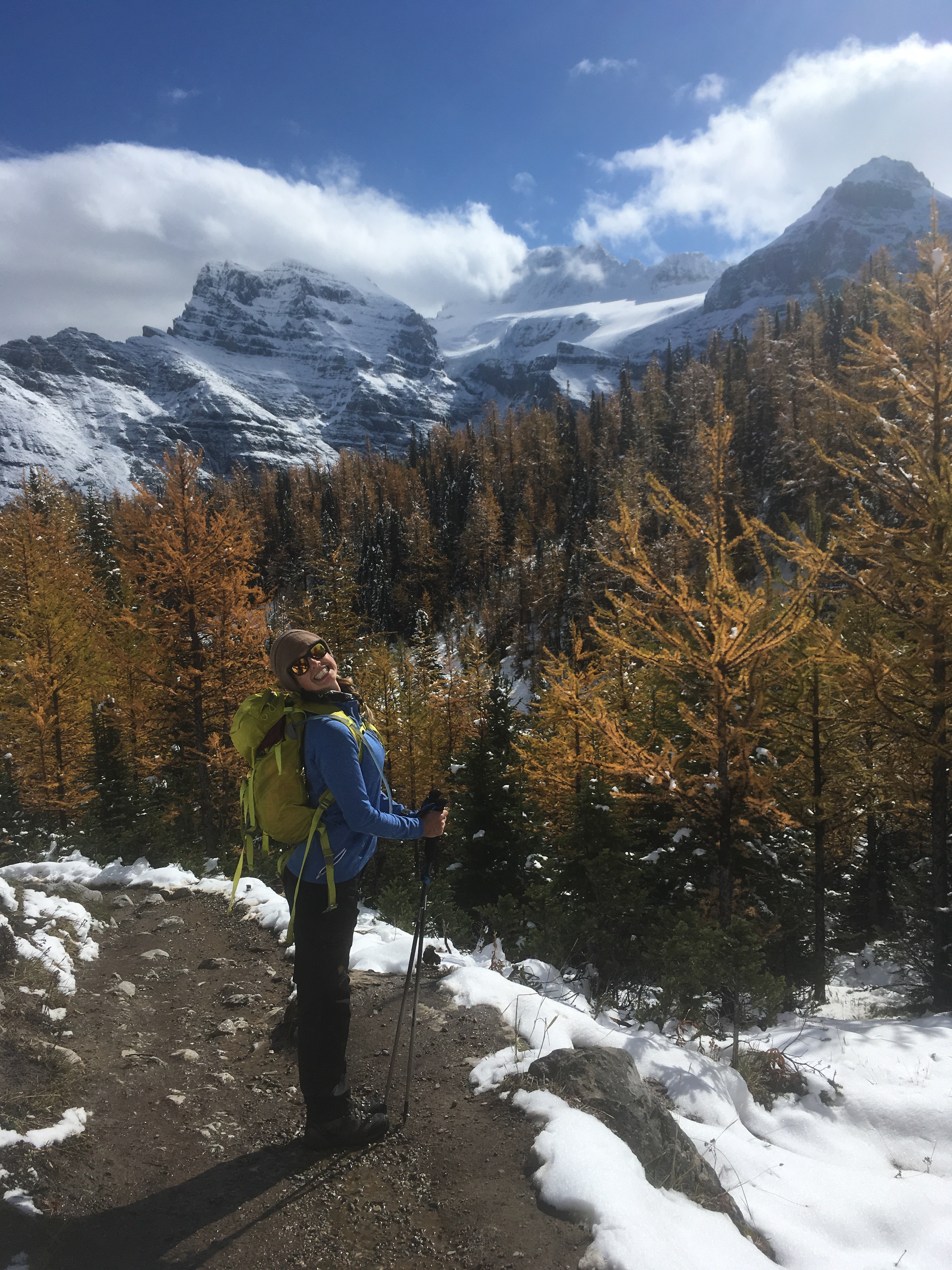 On our fourth day we decided to do Sulphur Mountain because we were exhausted and although we wanted to push ourselves we decided to hike up and then gondola down. The hike up was really easy but had endless switchbacks and got quite boring. Unfortunately it was snowing at the top so the view was less than epic but we wandered around and got to see the Cosmic Ray Station at the top which was historically cool. 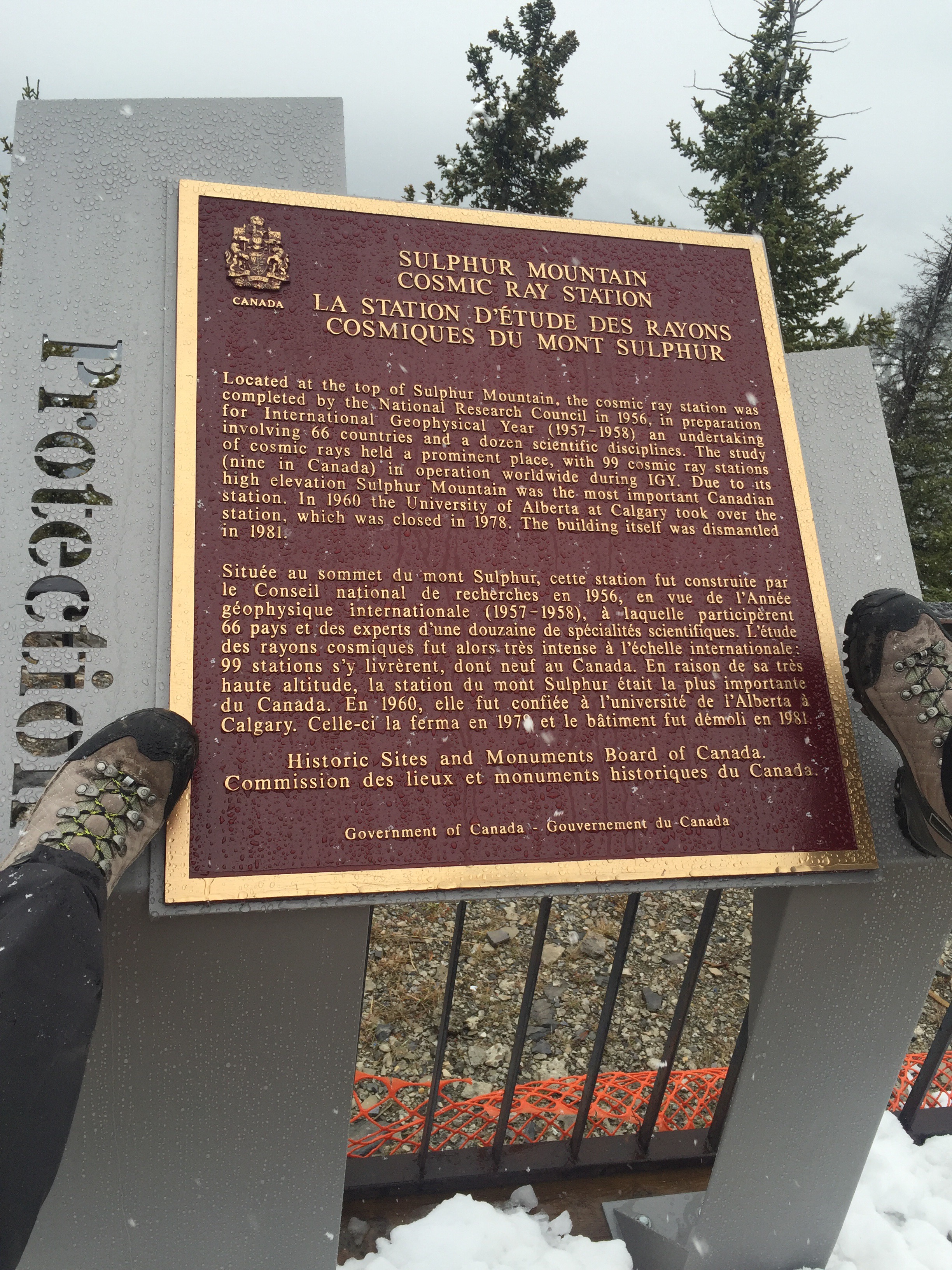 The gondola down was nice and easy and probably took 8 minutes. Although fairly cloudy we got a couple of good shots out the window. 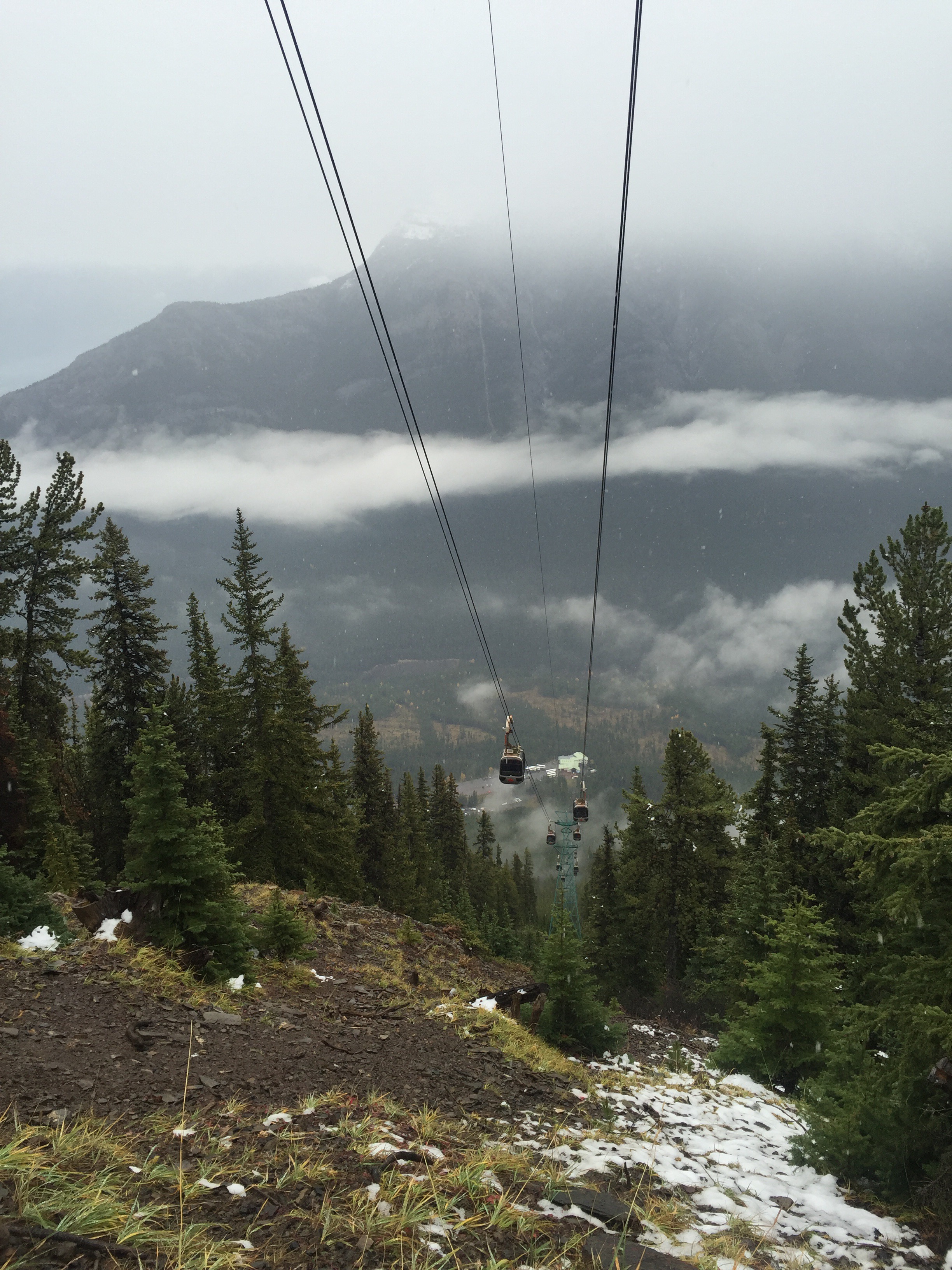 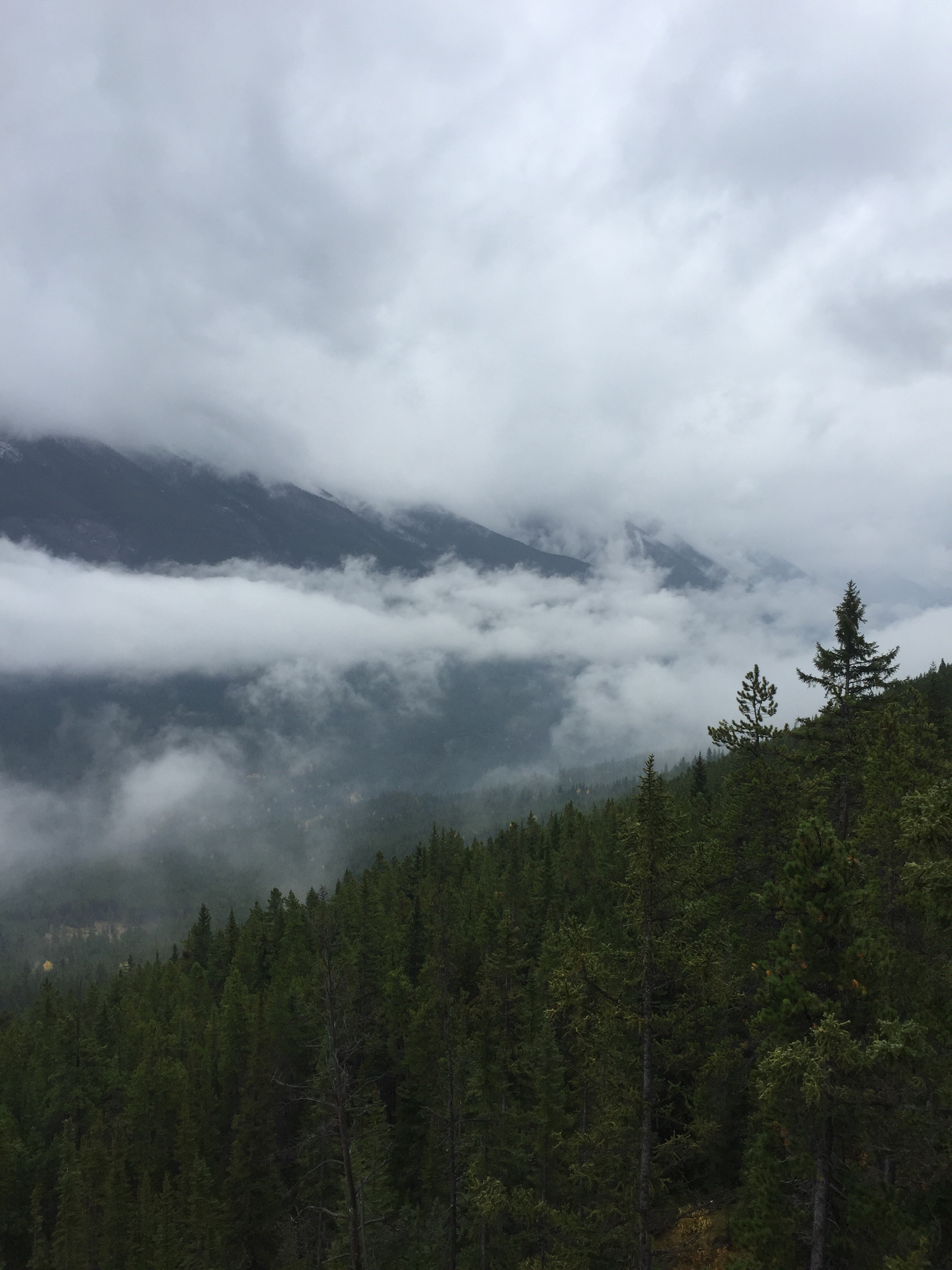 We had packed our bathing suits with us and headed over to the Banff Upper Hot Springs. Definitely nothing to write home about but cool to experience. I have definitely been spoiled by having Le Nordik in our backyard back home. 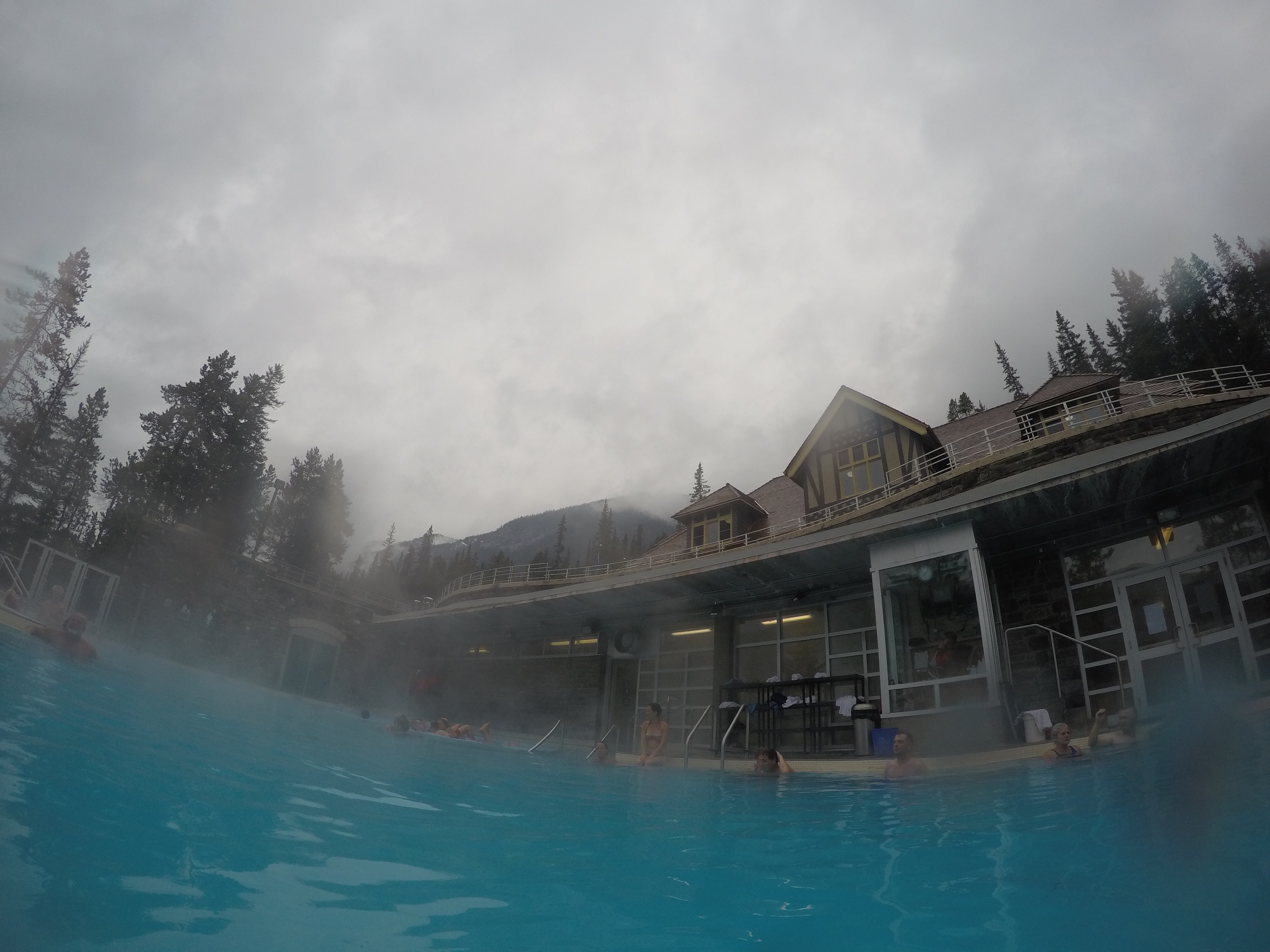 On our last day in Banff, Mike headed off with friends we had met at Camp Yoga to do some mountain biking in Canmore so I tackled Tunnel Mountain for a quick hike before going kayaking with my friend’s mom. Let’s not discuss how I randomly got on a wrong trail to head down and got lost for 20 mins and found myself in a berry patch full of Bear Skat and hyperventilated while hiking back up and then found the right trail down which I ran and got down in 10 mins. 🙂 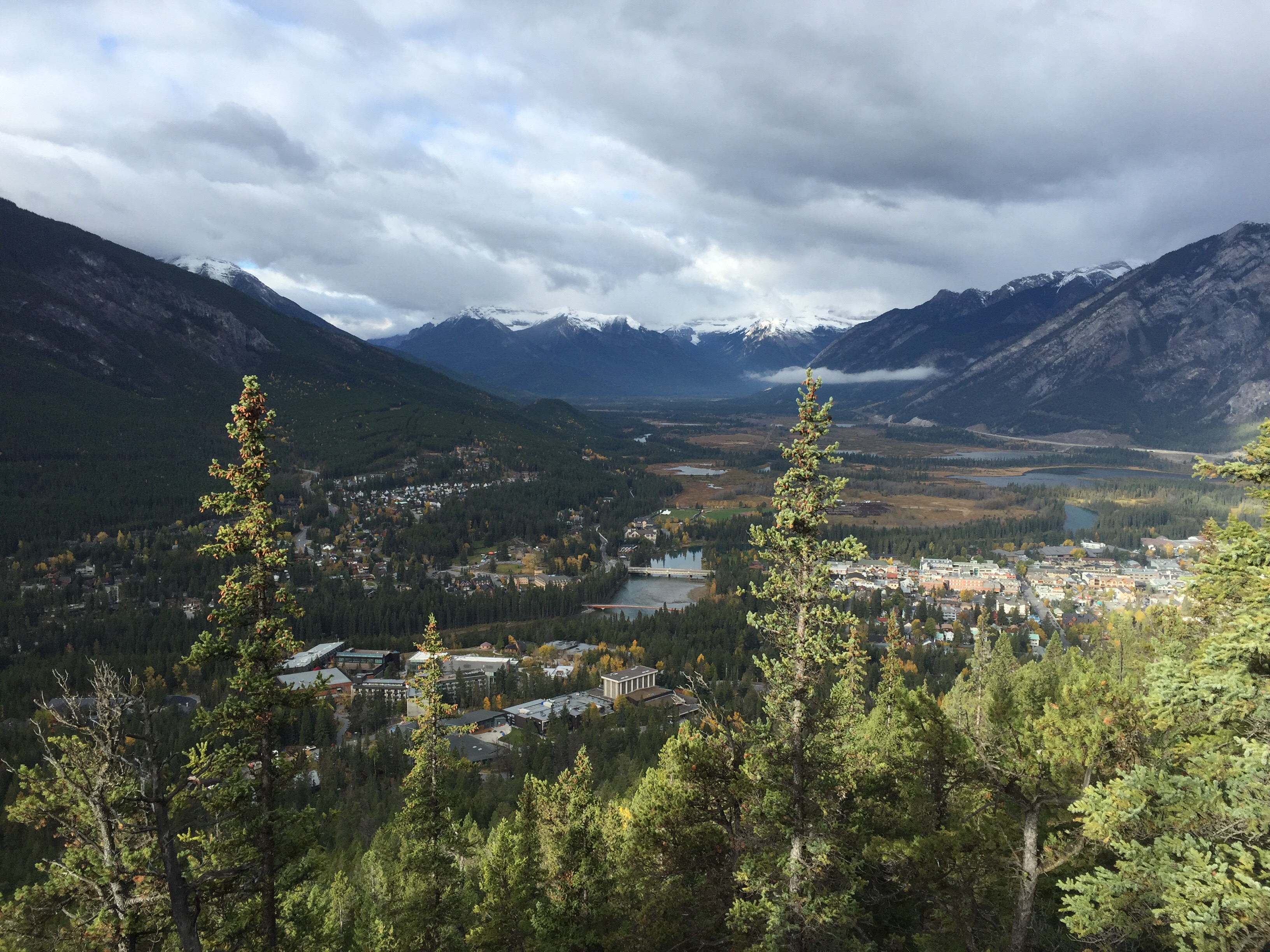 The view of Mt. Rundle from the top was pretty epic. I’m definitely coming back to tackle that beast. 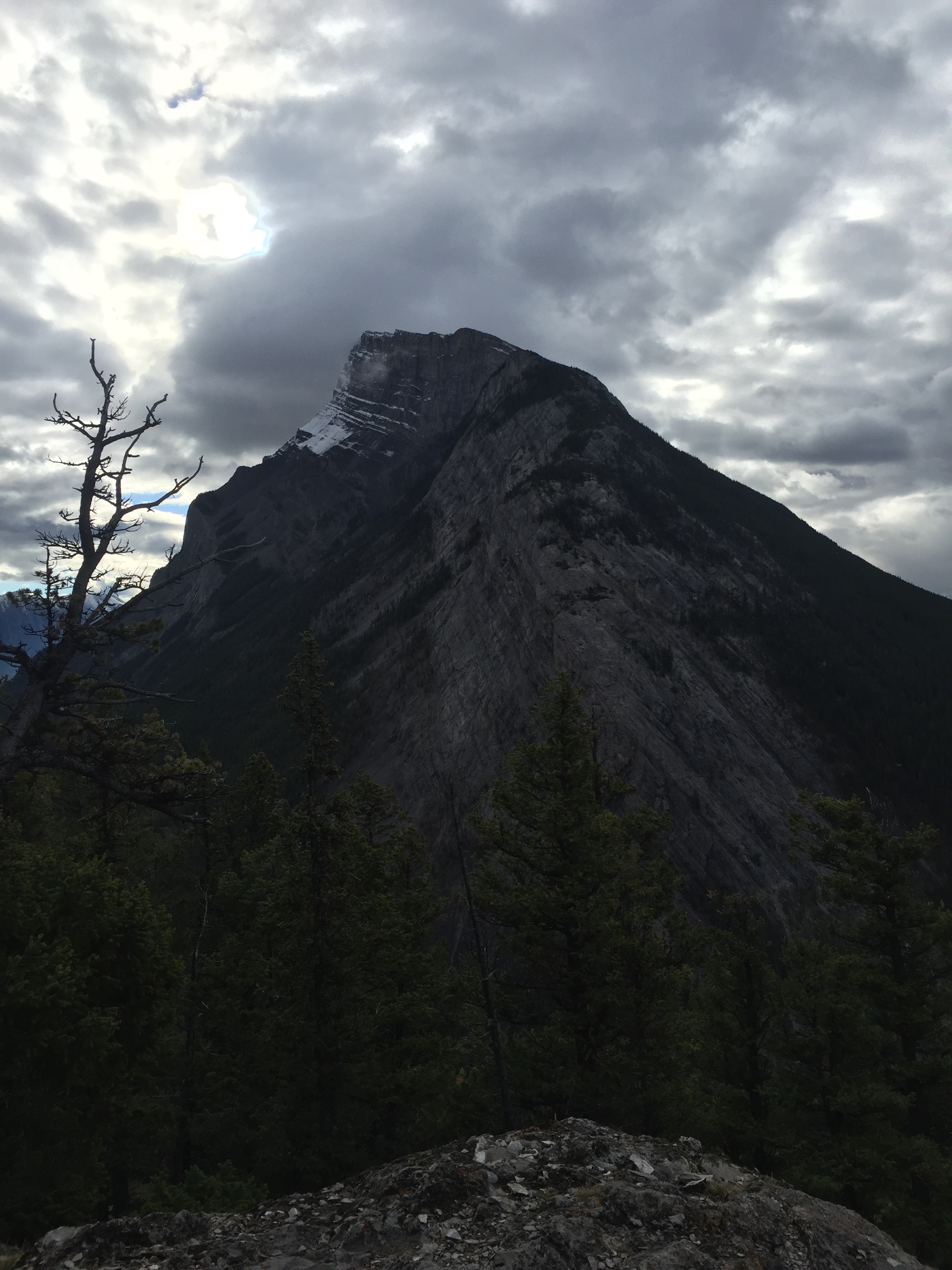 I’m so grateful I got to connect with Jamie’s mom. That afternoon I walked over to their house as she had offered to take me canoeing! She has two kayaks in her van, so we packed up and headed out to Two Jack Lake for a kayak excursion. The views of the mountains on all sides of the lake were again breathtaking. I’m running out of description words here! 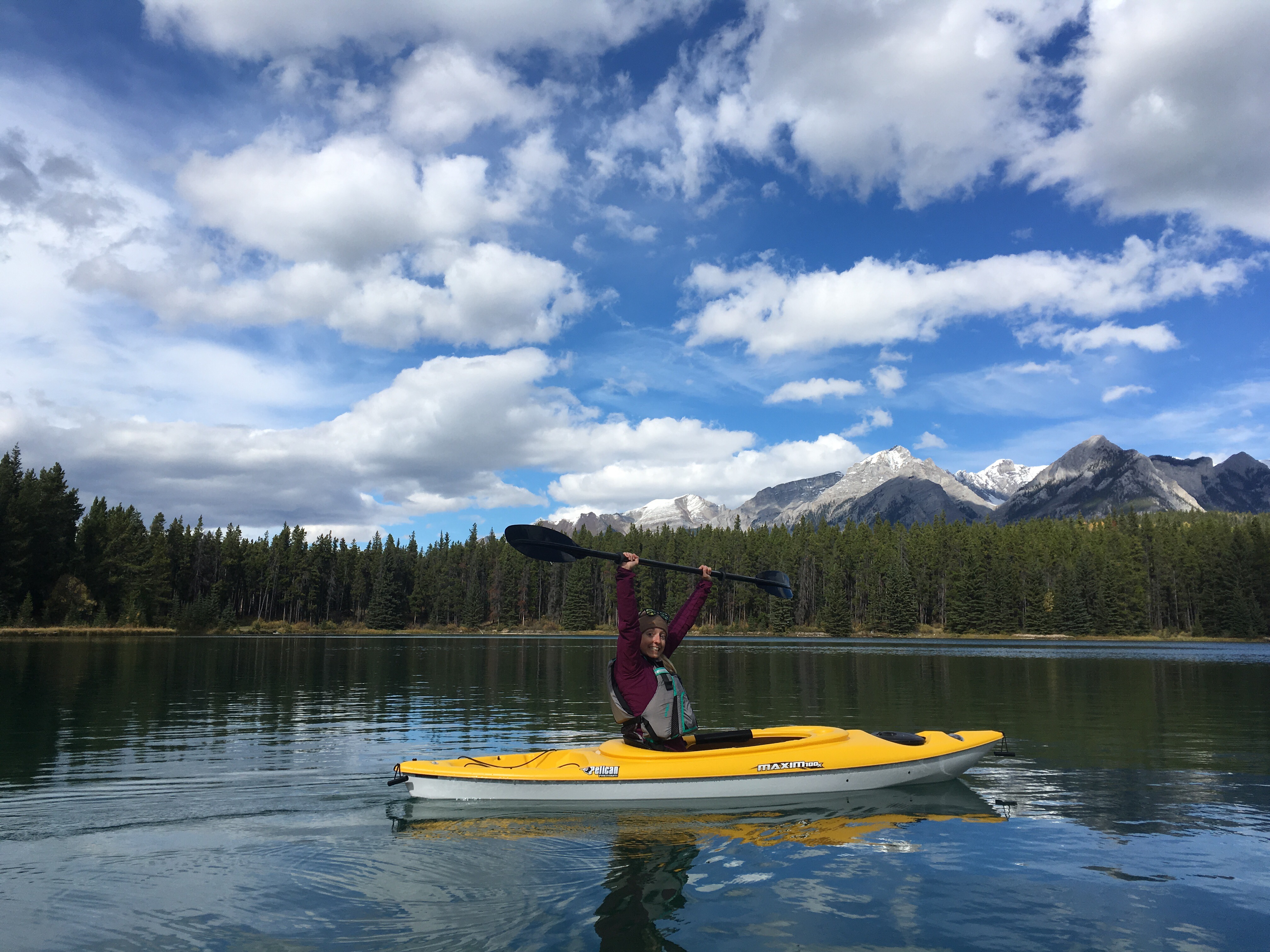 On our very last night we headed up to Storm Mountain Lodge. I had booked a log cabin for us and we absolutely loved the atmosphere, the location and being out in the woods with a fire going all night snug in our onesies. Yes we packed our onesies. I highly recommended spending 1 or a few nights here if you’re in the area. 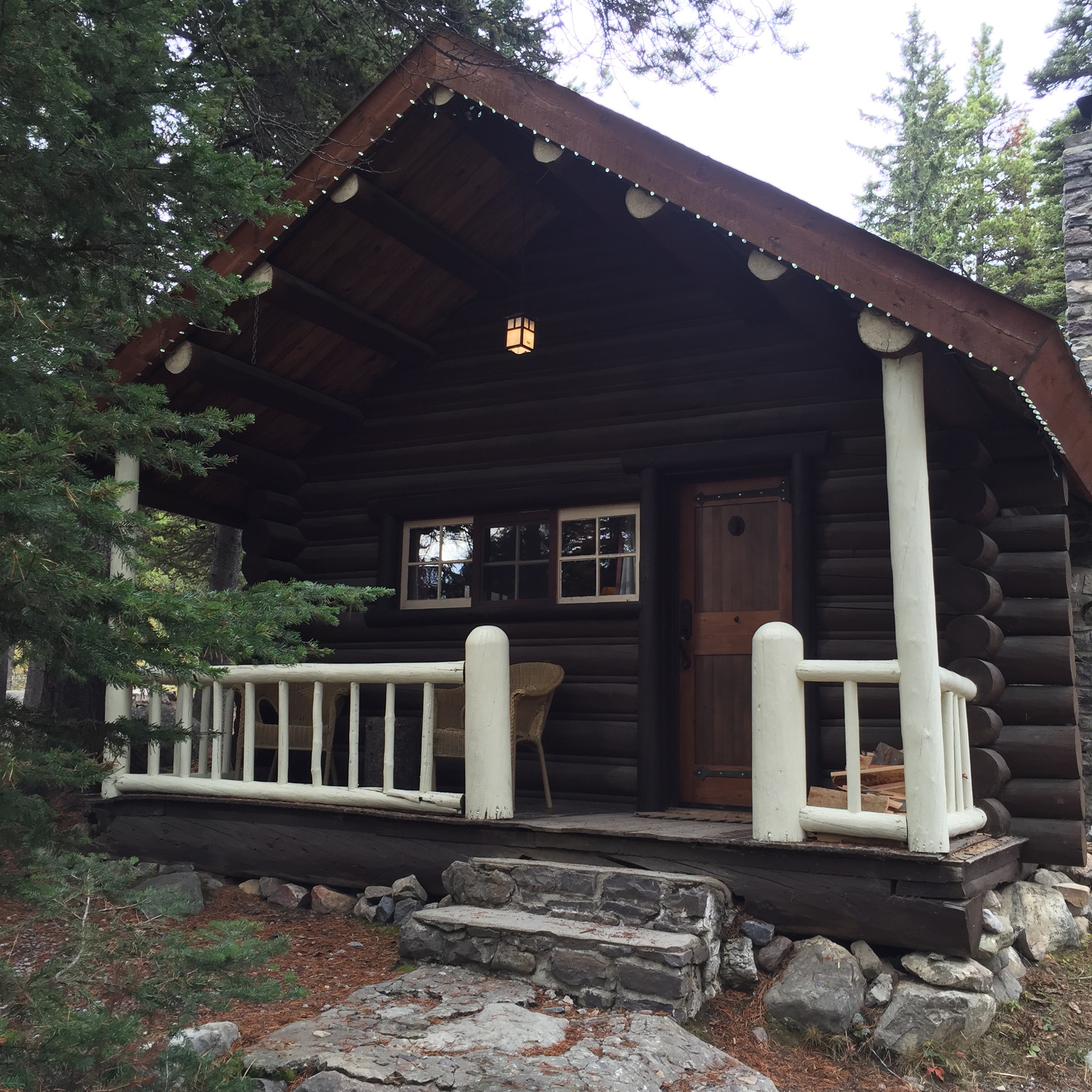 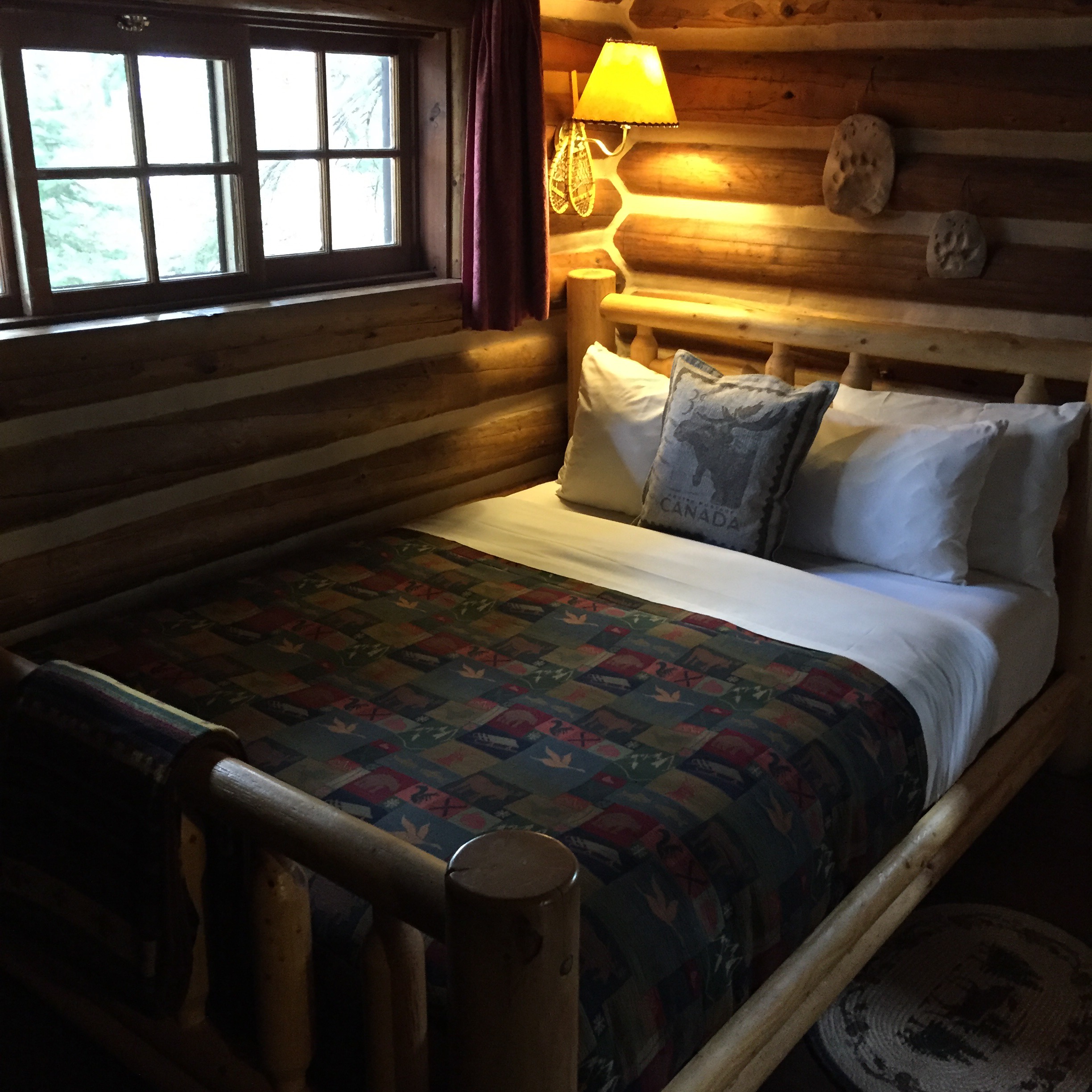 Last but not least we tackled 2 easy hikes on our last day and as we drove out of the mountains. First up was Marble Canyon in Kootenay National Park. So this means we were actually in BC & Alberta over the course of the week. This place was fascinating because you could still see the effects of the wildfires that gorged the region and the new growth underneath now coming up. 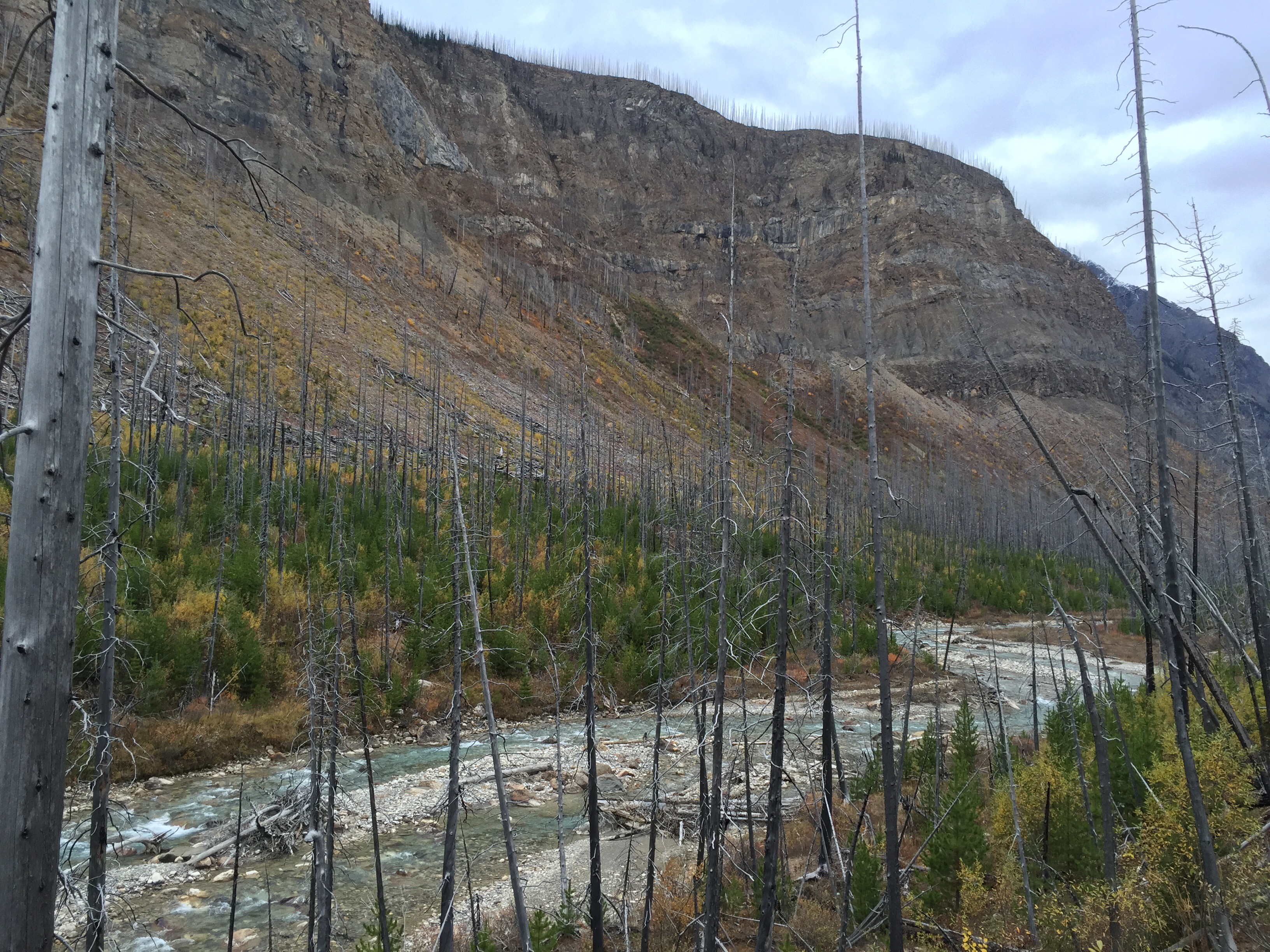 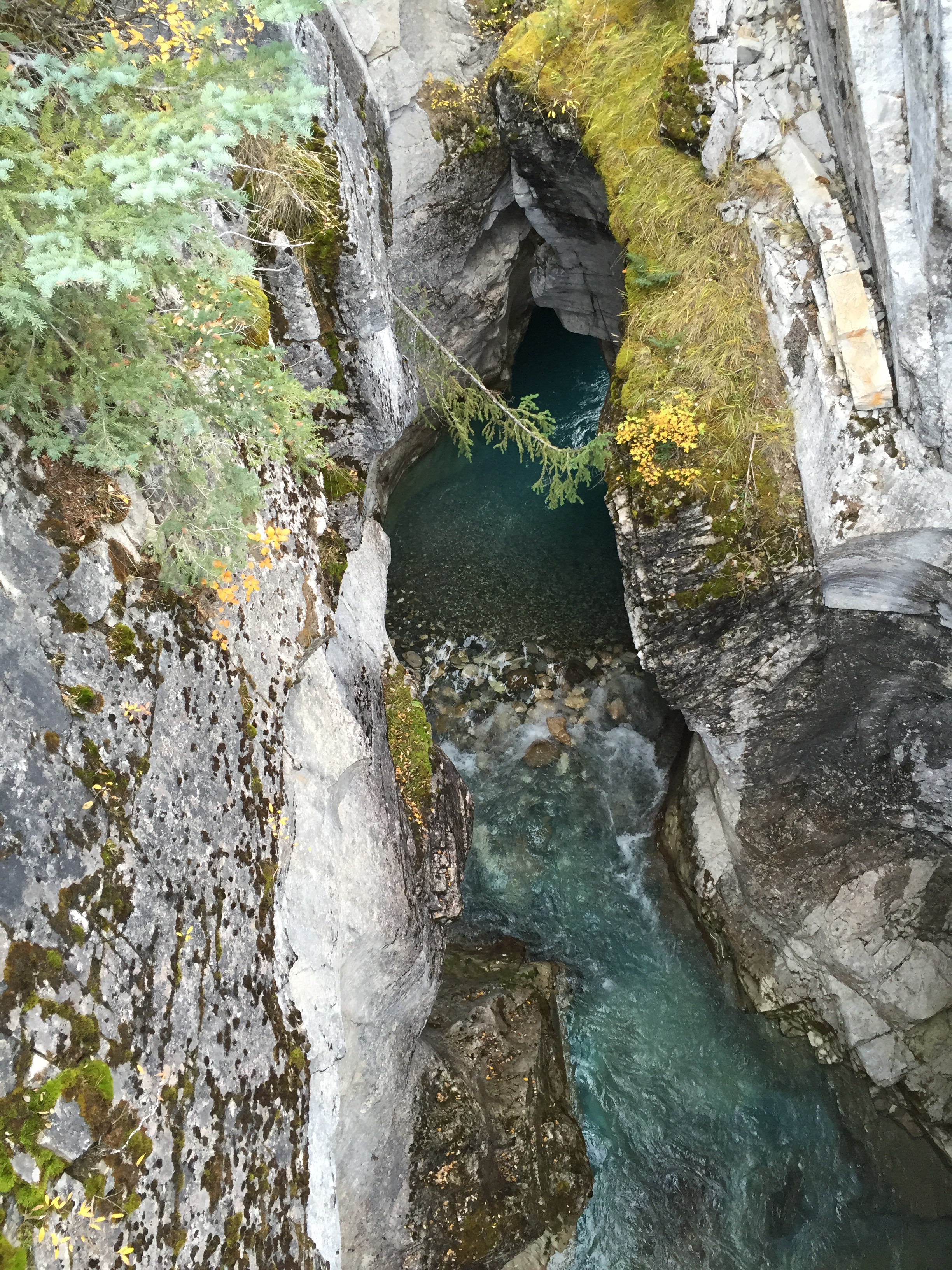 And then on the drive down to Calgary we stopped at Heart Creek Trail and did a quick 30 mins hike in and out of this canyon. 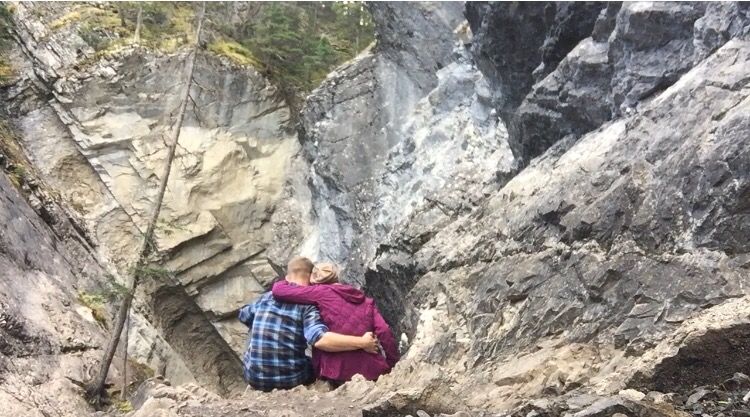 Our trip was filled with wonder, adventure, hiking, smiles and laughs. My heart is just filled up with love. It was our first trip together and I couldn’t have been more ecstatic with how it went. Here’s to many more adventures.

This site uses Akismet to reduce spam. Learn how your comment data is processed.

Get the Autoimmune Healing Guide to start optimizing different areas of your life.

Get my Top 10 Ways to Use Essential Oils Cheat Sheet!

Success! Now check your email to get the cheat sheet!

5 Areas of Life to Help Heal

Thriving is greater than surviing. Here’s a roadmap for you after an MS diagnosis.

Their relationship is something else

Take a moment to breathe

5 attitudes to develop to have an autoimmune thriv

When times are tough, these are my people. I hav

Get your oils out of the pretty storage box and in